Season 2 of Downton Abbey, currently running on Masterpiece Classic broadcast at PBS, has served up some pretty heavy fare for those of us who were perfectly happy to nibble on light dishes of budding love, fox hunts and garden parties in pre war times. Season 2 has brought us heavy courses of World War 1, convalescing officers, death, dangerous liasions, and the evil Mrs. Bates. Thankfully, there have been a few lighter moments, an amuse-bouche, or salad course, to help aid digestion. With Valentine’s Day coming up next week, I thought we would enjoy the recap of the crêpe. The ultimate star is Isis, Lord Grantham’s dog.

Ethel, the starry eyed new maid replaced Gwen, who left Downton for a dream job as a typist at the phone company (“one day there will be a phone in every home”). Ethel had her own dreams of becoming a movie star, and the war ending with all classes living together in harmony. These comments wound the curls even tighter on O’Brien’s head, inspiring some creative pranks: humiliation in front of the Crawleys, and late night electric outlet checks for vapours.

Don’t Mess with the Chef 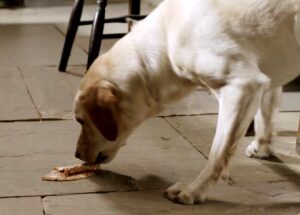 Enter Mrs. Patmore, just minding her own business, pre-occupied with preparing the upstairs dinner menu. Daisy starts looking for the exits when Ethel unintentially provokes the “General of the Kitchen”, and we are set up for our “fun with food” gag of the episode as Pharoah is fed the left over crepes.

Now I would not encourage you to feed your dog leftovers from the table, but sometimes you take inspiration where you find it. A famous french dessert, crêpe suzette is a simple dish which could add a touch of flash and elegance to your upcoming Valentine’s meal. Think large thin pancake in a sauce of caramelized sugar and butter, orange juice and zest, topped with flaming orange flavoured liqueur, such as Grand Marnier, Cointreau.

While everyone agrees that the “Suzette” was created in France in the late 1800s, the exact orgin is unclear. Was it named after Princess Suzanne (daughter of Edward, Prince of Wales, son of Queen Victoria) by accident? Or was it a creation to draw a crowd, inspired by french stage actress Suzette (Suzanne Reichenberg) whose character served crêpes on stage. Either way, it is a special sweet treat and can be made in under half an hour.

You can prepare crepes in advance and finish the sauce when it is show time. Foodies will likely have their own crepe pans, but don’t be intimidated if you don’t have one. My purpose here is to help you “give it a go”.

The recipe is simple and instructions are detailed to help you along. Get inspired and create your own, just be careful playing with fire! 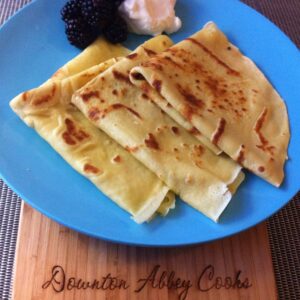 This is a special dessert which can be made in under half an hour. Don't fret if you don't own a crêpe pan, a 7" frying pan will do.
5 from 1 vote
Print Recipe Pin Recipe
Prep Time 5 mins
Cook Time 30 mins
Total Time 35 mins
Course Dessert
Cuisine English
Servings 16 crêpes