A lemon Swiss roll and amaretti trifle has been named the official pudding of the Queen’s Platinum Jubilee.

Fortnum & Mason, the famed grocer to the Royals hosted this event.  Narrowing 5,000 wonderful entries down to just five finalists was tricky, but choosing a single victorious baker and recipe from a final quintet of talented bakers was almost impossible.

While fit for a Queen this recipe is quite ambitious and feeds 20.  For shortcuts, focus on just making the swiss roll and mandarin coulis and buy the rest and assemble. 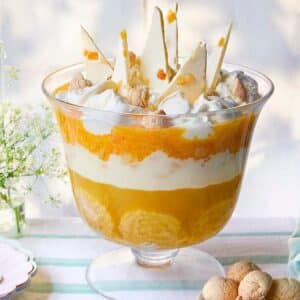 Keyword Platinum Jubilee, Trifle
Tried this recipe?Let us know how it was!