Thanksgiving in the US has past, and many are still savoring “leftovers” from huge family dinners.  I never really liked the term “leftover” as it carries a negative connotation, as if the food has lost some value somehow.  I like to use the term “makeover”, implying that yesterday‘s fabulous meal will taste even better today with a few touches, and more love added in.  I often find that many dishes take on new lives when enjoyed the second time around. Today‘s dish is a prime example.  Colcannon (a mashed mixture of potatoes and cabbage) is sinfully delightful when made into Colcannon cakes.  This is definitely a Lord D favorite.

American Downton Abbey fans know that Downton returns for its third season on PBS in less than seven weeks.  In the spirit of the Thanksgiving  “makeover” weekend, PBS offered “Downton Abbey Revisited”, a recap of the first two seasons and a few hints at Season 3.  It has been awhile since Downton has been on air so it is a great treat to see the characters again, recap some of our favorite Dowager moments, touching scenes of love found and lost and found again.  Not exactly sure why Angela Lansbury was asked to host, but any fan of Downton is a friend of mine.

The show was broadcast through the national PBS feed and your local affiliate might not have broadcast it last night, but perhaps will do so in the coming weeks.  I imagine that PBS will also post it for viewing at PBS.com. 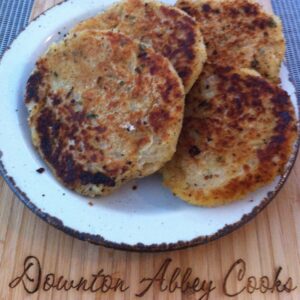 Colcannon is a lovely mashed mixture of potatoes and cabbage.  A great use to "makeover" colcannon is to make them into colcannon cakes.  A great addition to your brunch menu.
No ratings yet
Print Recipe Pin Recipe
Prep Time 15 mins
Cook Time 3 mins
Total Time 18 mins
Course Breakfast, Brunch, Side Dish
Cuisine Edwardian
Servings 4 servings

My recipe for Comforting Cabbage Colcannon
Tried this recipe?Let us know how it was!