Welcome Downton Abbey fans.  The leisurely pace of summer has long left us.

When life does get hectic, taking time for tea and conversation is ever more important to help pace yourself.  I love to dish on Downton Abbey and other topical issues one might discuss at tea, served up with a recipe with history. You may find my Online Guide to Afternoon Tea helpful in understanding traditions and recipes to serve at your own tea party.

Since the countdown to Christmas is upon us, today we are prepping for Christmas treats by preparing a large batch of Mincemeat.

Anyone can be a Downton Abbey Cook

Season 3 as depicted by the talented Downton Abbey PR team.

Season Three has now ended, and we look forward to the Christmas episode and what might be in store for Season 4.   I have been trying to behave by not give away too many spoilers, or passing along gossip, as Hugh Bonneville keeps reminding me you can’t believe everything you read.

Mincemeat is Easy To Make

Mince is best prepared in late November so it will be well-fortified for your holiday baking. 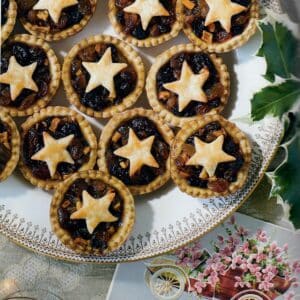 Mince is best prepared in late November so it will be well-fortified for your holiday baking. Use your mincemeat to prepare
Keyword Downton Christmas, Stir Up Sunday
Tried this recipe?Let us know how it was!

Must Have for Downton Fans