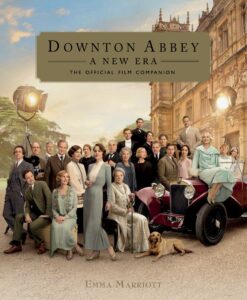 The new Downton Abbey movie finally launches on Friday, May 20th in North America, and as many reviewers have suggested it really is best viewed in a large theatre.  Unable to attend the New York opening Lord D and I are content to watch with fellow fans at our VIP seating theatre.

As an added bonus, there is a lavishly illustrated companion book, Downton Abbey: A New Era: The Official Film Companion to enjoy. It dives deep into the beloved and new characters, intriguing plot, sumptuous settings, and exclusive behind-the-scenes set photos.

A perfect gift for fans of Downton Abbey, the official film companion provides a unique, behind-the-scenes look at the making of the sequel to the globally successful Downton Abbey film.

In addition to the original principal cast—including Dame Maggie Smith as the Dowager Countess, Michelle Dockery as Lady Mary, and Hugh Bonneville and Elizabeth McGovern as Lord and Lady Grantham—fans will gain an unparalleled look at the new characters featured in Downton Abbey: A New Era, including those played by new cast members Nathalie Baye, Laura Haddock, Hugh Dancy, Dominic West and Jonathan Zaccaï.

Featuring spectacular photographs from the production, interviews with the cast and crew, and insight from creators Julian Fellowes and Gareth Neame, Downton Abbey: A New Era: The Official Film Companion offers fans an in-depth look into the magic and opulence of Downton Abbey.