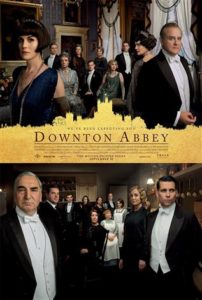 The long wait for the return of Downtown Abbey is over.  While the official launch date is September 20th, advanced screenings have been popping up across the country, allowing super fans to dress up in period costume and chat with fellow devotees. The producers cleverly included a 15 minute recap narrated by Mr. Carson and Mrs. Hughes to catch everyone up on all the plot lines of the major characters.

Critics have already weighed in; they generally agree this is a beautiful looking film which will thrill those who followed the series. The costumes are more glamorous, and there are more shots of Downton, portrayed by Highclere castle. The most cynical wondered whether Downton Abbey deserved to be transported to the big screen. I really enjoyed with a large audience as we all chuckled at the Dowager’s quips and Moseley’s antics.

The best way I can describe the Downton Abbey movie for me is that it is as satisfying as a wonderful meal with all your favorite dishes shared with your closest friends and family.

We see most of our favorite characters in all their glory.  Moseley in particular is delightful as comical relief, and I would argue he steals the show.  I was disappointed that Mr. Mason was missing from the film, just to see if the romance with Mrs. Patmore had matured.  But Mrs. Patmore did have a lot on her plate with the royals coming to stay, after all. And wasn’t Daisy going to move to the farm?

The Royal Visit is Based in History

The Royal Visit idea was based on the actual visit of King George V and Queen Mary in 1912 to Wentworth Woodhouse. They stayed for four days! Photos from the visit have been released in connection with the Downton Abbey movie, but I have yet to obtain the official menus from Wentworth (stay tuned).  Let’s not forget that these royals were Queen Elizabeth’s grandparents.

It would not have been typical for the royals to simply announce they were coming to visit, but a team of cooks and household staff would come ahead of the visit to ensure that the King and Queen would be comfortable.

As a food historian, my interest in Downton Abbey has always been the food.  I watched with excitement that the planned rebellion of the Downton downstairs staff centered on the food to be served to the King and Queen. With pen and pad in my lap, I keenly observed the foods which have a cameo role up to the visit, and in particular what would be served to the Royals.

You almost feel like a food detective: can you see what is being served? What could it be?  Some items were easier to determine than others.

Heard but not Seen

Mrs. Patmore discusses some dessert options for the royal visit, noting that they did have supplies for the following:

What was Served to the King and Queen?

I have spent over a year researching the dishes that the Royals enjoy.  Of course there is a difference between the foods they enjoy and what you serve on formal occasions.  In the end we don’t know exactly what was served for the royal luncheon and dinner. Stay tuned for more information.

Mrs. Patmore and Daisy do take stock of the inventory of supplies, so we can see some of the non-perishable items they were planning on using: potatoes, lemons, oranges and canned goods.

Daisy calls for Andy to take the Soufflés upstairs, and Bread pudding was ready to go. Not quite sure if the soufflés they were sweet or savoury, but I have recipes for both.

The new Downton Abbey Film Companion comes to the rescue. Lisa Heathcote, Downton’s food stylist, shares that the meal that Monsieur Courbet had prepared was “rib of beef and game pie”. Lamb cutlets were also planned for the menu.

Of course what you see on film isn’t always edible, and many choices were based on how well the food would hold up to the long hours of filming.

The Official Downton Abbey Cookbook has been finally been released.  It is a beautiful looking hard cover cookbook with pictures from the Downton set.  I have prepared many of these recipes which I will track on my site, if you are more interested in just recipes.  However, historian Annie Gray’s treatment of the period is exceptional and a great read if you simply love to look and read books.

A Sequel is in our Hands

There are already rumors that there may be another movie.  Not to put too fine a point on it, but if the movie does really well at the box office there will be serious discussions about a sequel.  So see the show and see it often.  I already plan to go at least two  more times. Money talks.