It is Thanksgiving weekend in Canada.  The Dowager might very well have asked her American nemesis Martha Levinson “What is Thanksgiving?” The British do not celebrate a one-day feast; instead, there is the month of Harvest Festival events.

The Canadian Thanksgiving holiday was officially proclaimed by  Parliament in 1879 and draws upon three traditions: European harvest celebrations; the first North American Thanksgiving (1578) observed by Martin Frobisher in the Arctic Circle; and the Pilgrims’ 1621 first celebration in Massachusetts.  In 1957, the date was set for Second Monday in October, and of course, Americans know that US Thanksgiving is held on the 4th Thursday in November.

In light of the harvest which leads to the holiday season, this week features an easy turkey gravy, the pièce de résistance of the turkey dinner. “It’s all gravy” is an English idiom, one of many we will explore over the coming weeks to share at the dining table. 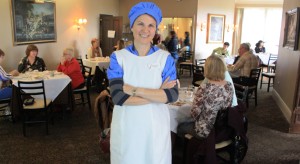 I had a fabulous time at What’s Cooking Bracebridge, an event that attracted some big names in the Canadian cookbook world: Rose Reisman, Anna Olson, Stefano Faita, Janet Podleski were in attendance.  Lord D and I had a wonderful time exploring this lovely little community, showcased by the changing leaves.   While we weren’t able to take part in all the events, we were entertained by Stefano’s fresh pasta demonstration at the Saturday night Italian gala. 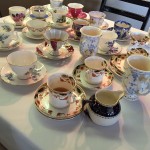 I hosted Afternoon Tea and talk on Sunday at Inn at the Falls, a lovely century-old inn, overlooking the Muskoka River.  The room was overflowing with locals who invited friends from Toronto, many of them history buffs, but all who loved tea and great scones. I am flattered that I inspired the Inn to decide to host their own afternoon tea on a regular basis. My work here is done.

Many thanks to the event sponsors, organizers, volunteers for the invitation, and for the hospitality of the innkeeper and chef at the Inn.

Lord D has recently developed a fascination with the origins of common phrases which put me to mind of those English phrases which focus on food, including “it’s all gravy.”  Enjoy these few:

As keen as mustard:  mustard was an essential ingredient to roast beef, a favorite meal for centuries.  It was also used as a cure for colds.  So keen as mustard is a really good thing.  The phrase dates back to 1672, much before Keen’s Mustard was formed in 1742.

Baker’s Dozen:  Medieval English bakers sold their goods by weight not quantity, so they made an extra loaf to avoid being penalized for selling short weight.

It’s all gravy:  This phrase originated from an Old English saying. Life, it explained, is meat and potatoes, and the luxuries are gravy. So essentially when you say “it’s all gravy,” you’re saying “it” is all the awesome, saucy goodness in the world. And that’s what gravy is all about! 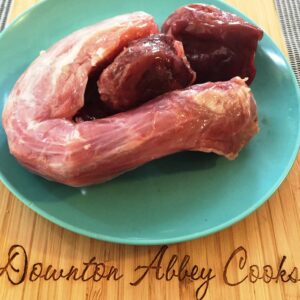 Ever wonder what you can do with the giblets you pull out from your raw turkey?  A thrifty Abbey Cook makes use of all parts of the turkey, so make a broth that will give a flavour boost for your Turkey Pan Gravy.
No ratings yet
Print Recipe Pin Recipe
Cook Time 1 hr
Total Time 1 hr
Course Pantry Basic
Cuisine English, Victorian
Servings 2 cups

Use the broth to make a more flavourful turkey pan gravy.
Keyword Downton Abbey Recipes
Tried this recipe?Let us know how it was! 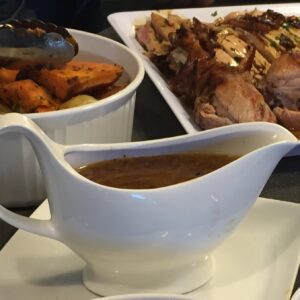 Make your gravy even more flavourful by making giblet broth.
Tried this recipe?Let us know how it was!