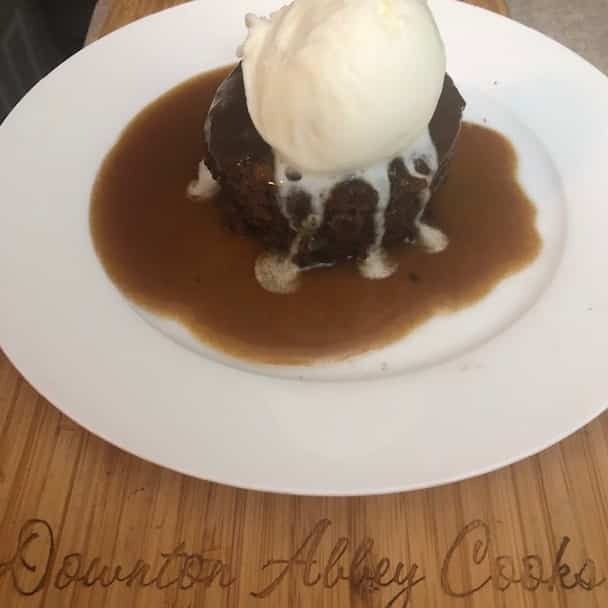 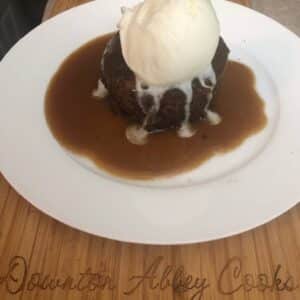 Sticky toffee pudding is a delicious sponge cake consisting of chopped dates and toffee sauce. It’s also typically paired with vanilla ice cream or custard because it complements the dish so nicely. Great dish for a special occasion or to serve during the holidays.

“Although early British puddings were either savoury (meat-based) or sweet and were typically boiled in special pudding bags, modern British puddings are commonly dense, moist cakes–often laced with rehydrated dried fruits–that are either steamed or baked.  These toffee-topped did not appear on the English table until the late twentieth century, though similar small puddings baked in ramekins would not have been uncommon in Mrs. Patmore’s kitchen.”

Sticky toffee pudding was only invented in the 1940s, and the origins are quite vague.  However, it can be traced back to two Canadian air force officers and a British hotel manager. During the Second World War, the officers lodged at a hotel in Lancashire. While there, the chaps gave the recipe to the hotel manager, a woman named Patricia Martin.  Decades later, Martin gave the recipe to Sharrow Bay Country House Hotel employees Francis Coulson and Robert Lee. They were the first people to publically sell this sticky sensation, which inevitably became an international smash.

For this and other Downton-worthy recipes, order the book directly from Amazon.

This recipe can be cooked up to a day ahead and reheated. The sauce can be made up to 3 days ahead, covered and stored in the fridge.
Keyword Afternoon Tea, Sticky Toffee Pudding
Tried this recipe?Let us know how it was!
previous post The First Thanksiving Meal
next post Where are All the Downton Abbey Games?
Back to top
mobile desktop