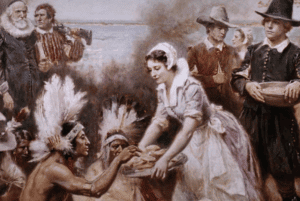 When we think about Thanksgiving dinner, we typically think of roast turkey with stuffing, cranberry sauce, mashed potatoes and pumpkin pie. We assume that we are carrying on the traditions of that first meal held in 1621 in Plymouth, but not all of our favourites were served, mainly since they weren’t available 400 years ago.

On the first Thanksgiving, colonists were likely outnumbered by more than two to one by their Native American guests.  Seventy-eight percent of the women who had travelled on the Mayflower had perished that winter, leaving only around 50 colonists to attend the first Thanksgiving.  According to eyewitness accounts, among the pilgrims, there were 22 men, just four women and over 25 children and teenagers.

Using DNA to research your family tree, and thanks to Ancestry, we discovered Lord D’s family are descendants of John Howland and Elizabeth Tilly who were 21 and 13 at the time of crossing.  Spoiler alert, they married. There are 35 million Mayflower descendants in the US.  Who knows you may also be related.  Learn more from the Mayflower Society.

What was on the Menu

The columnists went on a “fowling” hunt and while wild turkeys were plentiful as a common food source for both English settlers and Native Americans. But it is just as likely that the fowling party returned with other birds we know the colonists regularly consumed, such as ducks, geese and swans. Instead of bread-based stuffing, herbs, onions or nuts might have been added to the birds for extra flavor.

Local vegetables that likely appeared on the table include onions, beans, lettuce, spinach, cabbage, carrots and perhaps peas. Corn was plentiful but would have been ground and made into thick corn mash.

As for fruits, there would be blueberries, plums, grapes, gooseberries, raspberries and cranberries, which Native Americans ate and used as a natural dye.  However, sugar supplies would have been depleted by the first Thanksgiving, so it was not likely that cranberry sauce or relish made an appearance.

Culinary historians believe that much of the Thanksgiving meal consisted of seafood, which is often absent from today’s menus. Mussels in particular were abundant in New England and could be easily harvested because they clung to rocks along the shoreline. The colonists occasionally served mussels with curds, a dairy product with a similar consistency to cottage cheese. Lobster, bass, clams and oysters might also have been part of the feast. Colonist Edward Winslow describes the bounty of seafood near Plymouth:

Whether mashed or roasted, white or sweet, potatoes had no place at the first Thanksgiving. After encountering it in its native South America, the Spanish began introducing the potato to Europeans around 1570. But by the time the Pilgrims boarded the Mayflower, the tuber had neither doubled back to North America nor become popular enough with the English to hitch a ride. New England’s native inhabitants are known to have eaten other plant roots such as Indian turnips and groundnuts, which they may or may not have brought to the party.

Both the Pilgrims and members of the Wampanoag tribe ate pumpkins and other squashes indigenous to New England—possibly even during the harvest festival—but the fledgling colony lacked the butter and wheat flour necessary for making pie crust. Moreover, settlers hadn’t yet constructed an oven for baking. According to some accounts, early English settlers in North America improvised by hollowing out pumpkins, filling the shells with milk, honey and spices to make a custard, then roasting the gourds whole in hot ashes.