Egg nog (or  eggnog) means “egg in a cup” and traditionally is served in small cups, so you can save some calories simply by taking a smaller portion.  Egg nog was a preferred holiday drink for English aristocracy who spent Christmas at country homes where estate dairies provided fresh milk, which lower‑class city dwellers did not have access to. The Scots enjoy Auld Man’s Milk on Hogmanay.

Prior to the 1600s, the most closely associated drink was called “posset” which was all the rage in the middle ages, and survived unto the nineteenth century, but you rarely hear of them now. The posset was a warming concoction of hot milk mixed with hot beer, sherry, etc., sugar, and various spices, excellent for keeping the cold at bay when houses were heated by fires not central heating. It was a drink for the aristocracy since prices for milk, eggs and sherry were high.  Accordingly, it would have been used in celebratory toasts.

We first see the term eggnog used in the Oxford English Dictionary [2nd edition, London] in 1825. The beverage was defined as “A drink in which the white and yolk of eggs are stirred up with hot beer, wine, or spirits.”

Today we can buy egg nog by the carton at the grocery store, laden with heavy creams and preservatives.  Making your own is better for you and your guests. 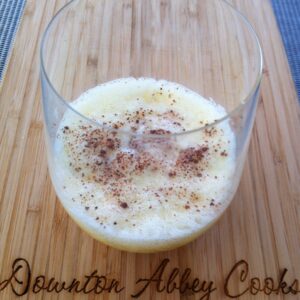