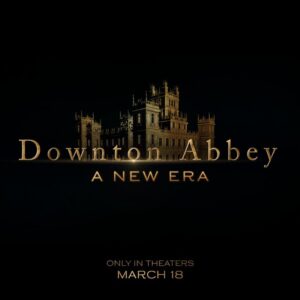 At this week’s CinemaCon event for movie theatre owners, Focus Features revealed much-awaited details about the sequel to the 2019 film.

We no longer have to refer to the movie sequel as “Downton Abbey 2”. The official name, accompanied by the above teaser poster is Downton Abbey a New Era.  The poster also disclosed the global release starts March 18th.

According to an insider, one of the iconic ‘Downton Abbey’ characters will be killed off.

The tear-jerking scenes for the second movie based on the hit TV period drama have been filmed and a source has claimed that creator Julian Fellowes “has made this death so poignant”.

No word when the new teaser will be released to the public, but insiders have seen the trailer which joins the Crawley’s and their staff making preparations for an overseas journey are underway. At some point, Mr.Carson, played by Jim Carter utters “The British are coming.” It also appears there might be a wedding.