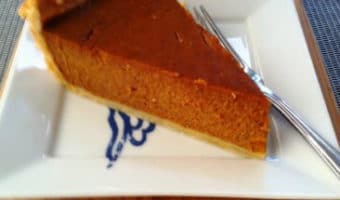 Autumn is in the air, and so are those lovely fragrant pumpkin spices.  With Thanksgiving on the horizon, there is still time to practice to help you perfect your holiday pie. While we associate pumpkin pie with American cuisine, recipes for pumpkin pie appeared as early as … END_OF_DOCUMENT_TOKEN_TO_BE_REPLACED

While we associate pumpkin pie with American cuisine, recipes for pumpkin pie appeared as early as the 17th century. Originally they were called “pompion”, the French word for “pumpkin”, which suggests that the French created the first pumpkin pie recipes. Non fat evaporated … END_OF_DOCUMENT_TOKEN_TO_BE_REPLACED