The holidays are over. In our home holiday decorations have been carefully packed away along with the old Downton calendar, replaced by a new Downton Calendar waiting to be filled with important dates. I sometimes imagine that the holidays are like life at Downton; a packed social calendar without any work commitments.

It is also the beginning of awards season and we give our condolences to Joanne and Dame Maggie for their loss at the Golden Globes last night, but that show really is not “Downton – worthy” in any event.  But time to get on with it, embrace the new year with all that it brings, and enjoy the last season of Downton.

In keeping with tradition here, I will continue to share a recipe from each episode which gets on screen mention as my love letter to the Downton kitchen staff and to those fans who love the food on the show. Today’s recipe is homemade horseradish, which really is quite easy to make yourself.

A quick recap of what went on down and upstairs this past week:

Afternoon Tea: what a lovely way to host fellow Downton fans as you discuss the latest episode, and ponder what Downton will deliver next. The book contains 60+ recipes for tea treats, the three S’s: scones, sandwiches/ savouries and sweets.

Whether you are hosting 2 or 20, this book has lots of ideas. Containing 220+ traditional Downton era recipes with a modern twist, this is a great book to create some simple or complex dishes for your Mary or Anna. This 448 page ebook has been updated to include both metric and imperial measurements and now includes famous Downton dishes throughout the series.  Book sales help offset my costs in food, equipment and time to provide you new recipes on a regular basis. This ebook is now available for download on my site and on Amazon:  Abbey Cooks Entertain: 220 recipes inspired by Downton Abbey, Seasons 1 – 5 Print Version is here.  The good news is that the 2nd Edition is available on Amazon. The full book is 450 pages and will contain famous Downton recipes from Seasons 1-5. 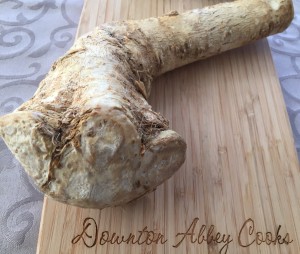 Horseradish looks like a very large parsnip with little aroma until you cut into it. Although it’s most commonly sold in its grated form, horseradish can be found whole or in powder, too. Believed to have originated in Eastern Europe and western Asia, horseradish has graced the Passover seder table since medieval times as one of the traditionally eaten bitter herbs, or maror, symbolizing the bitterness of the Israelites’ slavery in Egypt.

How it got its name: While the original name for horseradish in many places in central and eastern Europe was khreyn, the Germans chose the name meerrettich, or sea radish, a reference to the seaside locations in which the feisty herb was often found growing. Some believe that the English misunderstood meer in meerrettich to be mähre, meaning old horse (and a fitting description of the toughness of the roots). Others claim that the prefix “horse” in horseradish related to the size and coarseness of the root as compared to regular radishes.

Medicinal Use: Over the centuries, nearly every part of the horseradish plant has been used for medicinal purposes, such as an expectorant for coughs and to relieve joint discomfort and rheumatism. Horseradish’s antibiotic properties are said to be effective in clearing urinary tract infections and treating bronchial and throat infections by destroying harmful bacteria.  According to a 2004 study from the University of Illinois, horseradish is rich in glucosinolates that boost the liver’s ability to expel carcinogens, and may even stop the growth of existing tumours. The study suggests that only a dab of horseradish on a steak, or as little as one gram (less than a teaspoon), will show health benefits.

The United States is the top horseradish producer in the world, followed by Europe and Canada. An estimated 10.8 billion kilograms of horseradish are processed annually in the U.S., most of it grown in southern Illinois.  Collinsville, Illinois – known as the Horseradish Capital of the World –produces some 60 percent of the world’s horseradish.

extracted from the writings of Meryl Rosenstein and Rosemary Mantini

Still a popular condiment in English cookery (Lord D and I love it on roast beef), it is quite easy to make and more economical than buying store-bought if you use a lot of horseradish, as we do.

Do take precautions to ensure your work area is well ventilated and protect your hands and eyes in case you get a really potent root. If chopping onions produces the tears you felt after Matthew and Sybil died, horseradish can make you feel more like the impending end of Downton Abbey!


To control the heat: The time at which the vinegar is added can control the heat, so if you prefer milder horseradish, add the vinegar sooner.
Once you’ve cut into the root you can keep it in a paper bag in the refrigerator for a week or cut into smaller pieces and freeze until required.
Mrs. Patmore and Daisy would have used a fine grater to process the horseradish, and then add the vinegar and then cold water to thin, but we have the modern convenience of blenders and food processors to do the job. Saves time and lessens your exposure to the vapours. 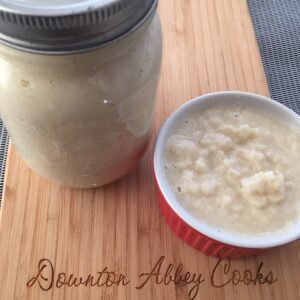