I grew up with horses and, while fortunate to have lived close to the now internationally famous Spruce Meadows, did not have the same passion as some of my girl friends who pursued jumping more seriously. For most of them the love of horses faded when they discovered boys.

I did do some jumping and was terribly excited when news of the gathering of the local horsey set for a fox hunt reached our home. It was actually more of a faux hunt, with a pre-set course through an open area leading into woods and jumps of various heights fashioned out of fallen trees along the walking trails. The leader of the hunt more a hat with a fox tail on it, so that is about all we saw of an actual fox. Still it was fun to get out of the riding arena, enjoy fresh air and good times with new and old friends and family alike.

The famous episode (S1E3) in which Lady Mary meets Kemal Pamuk, the handsome Turkish diplomat, was very well conceived and written in my mind. It is hard to imagine such sparks flying from a casual walk around the gardens or a late afternoon tea. So the thrill of a fox hunt, an actiivity which artisocracy often participated in–and which women were often a part of–provides the perfect ignition for the dangerous liaison.

Vic, who blogs at Jane Austens World provides excellent research about the hunt which you might find interesting. The Fox Hunt: From Downton Abbey back to its Origins. Taking both an historical view of the hunt and reporter’s curiousity about what the readers of Horse & Hound (brings back memories of Notting Hill) had to say about how the hunt was protrayed on film, Downton fans will love the section about the filming of the hunting scenes at Highclere Castle. Apparently, as told by Lady Carnarvon (the actual owner) that during the filming an actual fox popped out of the nearby hedges and set the hounds off running across part of the estate which was being reserved for a wedding.

So what about the food?

As a cook, my first thought would be “what I would serve the riders before they leave for the hunt?”.  In Edwardian times, port and fruit cake was traditionally served.  At Downton, Mrs. Patmore and the staff were busily preparing a snack of punch (likely Pimm’s Cup which had less alcohol as you do need to avoid drinking and riding), and likely fruit or ‘”hand cake”,  which could be eaten by the hand.  While there aren’t many fans left of fruitcake, here are recipes for some breads which would be great to serve:

Today, we will make my favorite, carrot cake, although for the hunt you may wish to omit the icing, messy on the gloves and all. 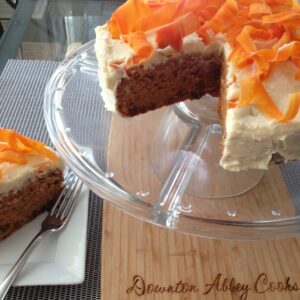 Traditional carrot cake recipes have a lot of fat in them due to the oil. I substitute with applesauce, and use whole wheat flour which makes a dense cake which is still moist.
5 from 2 votes
Print Recipe Pin Recipe
Prep Time 15 mins
Cook Time 40 mins
Total Time 55 mins
Cuisine Edwardian, English, Vegetarian
Servings 8 servings 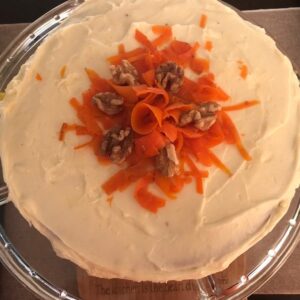