It has been a hard day for me, the day after the PBS Masterpiece broadcast of S3E5 (or E4 if you go by PBS calculations: they showed ITV E1 & 2 together as one for the premier).  As millions of Americans watched this episode, there were gasps of disbelief as events unfolded. The amount of chaos and mayhem was far too much for one to bear and many fans are consoling each other today as they struggle to digest what had happened. I myself wanted to jump through my TV set to comfort the characters.  But of course, this is just a TV drama and it was all make-believe.

I am of course referring to the horrible kitchen mishaps. There is nothing worse to a cook than when things go wrong, and this was excruciating to watch.  What beginner and non-cooks don’t realize is that not all dishes turn out perfectly and some make it to the dining room undetected, like the salted raspberry meringue.  Others are ruined.  Tragedy can strike the experienced cook, just as easily as the novice.  You never know.  I know, it can be heartbreaking. This week we witnessed two disasters, one dish thankfully was brought back to life, the other unfortunately did not make it.

I was so traumatized by what happened in the kitchens that I blanked out the rest of the show. Or was it the other way around?  There were some other major plot twists, but I wouldn’t want to spoil things for those fans who have yet to see it. Perhaps I can talk about it another day, but today I will just console myself with rice pudding. 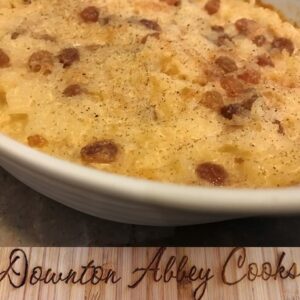 This is a Victorian era recipe based on Mrs. Beeton's recipe, which could be tossed in the oven and left while attending to other kitchen duties in the Abbey. Really easy without a great deal of fuss.
5 from 3 votes
Print Recipe Pin Recipe
Prep Time 5 mins
Cook Time 2 hrs
Total Time 2 hrs 5 mins
Course Dessert
Cuisine English, Victorian
Servings 4 people

For the Downton Abbey Collector