This dish is essentially an upstairs version of a simple beef stew, named for Burgundy after the type of wine which was used in the dish.

Boeuf Bourguignon, a delectable beef stew, celebrates its roots through homage to its prized Charolais cattle.  Reputed for their distinct taste, low-fat content, and gentle temperament, the creamy-white Charolais bulls,  found around the Charolles region of southern Burgundy, are used extensively in the making of bœuf bourguignon.  The cattle are fed only hay, fodder, and cereal, which produce healthy cows.  The meat is very tender and used for stewing and grilling.

French chef Auguste Escoffier,  first published the recipe in the early 20th century.  Over time, the recipe evolved from honest peasant fare to haute cuisine, and Escoffier’s 1903 recipe became the standard-bearer, using a whole piece of beef in the stew.  Much later, Julia Child used beef cubes rather than a whole piece, bringing boeuf Bourguignon to the notice of a whole new generation of cooks. 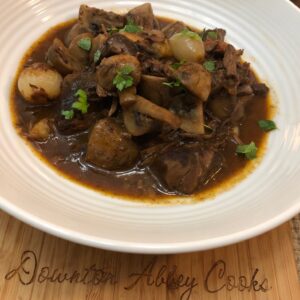 Prepare the Onions and Mushrooms

Dry red wine has 4 grams of carbs so is ok on a keto/low carb diets as long as you are tracking your carb count for the day.  I like to serve on cauliflower rice.
Tried this recipe?Let us know how it was!