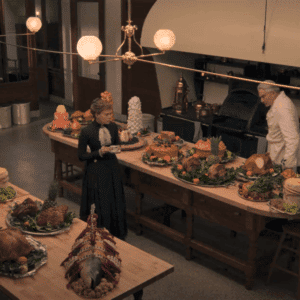 Downton Abbey fans have been waiting a decade for The Gilded Age, the “American” version of Downton from Julian Fellowes.

The story begins in 1882 with young Marian Brook moving from rural Pennsylvania to New York City after the death of her father to live with her thoroughly old-money aunts, Agnes van Rhijn and Ada Brook.

Accompanied by Peggy Scott, an aspiring writer seeking a fresh start, Marian inadvertently becomes enmeshed in a social war between one of her aunts, a scion of the old-money set, and her stupendously rich neighbours, a ruthless railroad tycoon and his ambitious wife, George and Bertha Russell. Exposed to a world on the brink of the modern age, will Marian follow the established rules of society, or forge her own path.

In this episode, I was thrilled as a foodie to report that food plays a role. The ambitious Bertha is determined to break into New York society and after learning that many were curious about their new mansion, decides to open their doors, planning for hundreds of people to come through.  She learns the hard way that there is a wide divide between new and old money that lobster and croquembouche towers cannot bridge.

Yes, Food is the Same 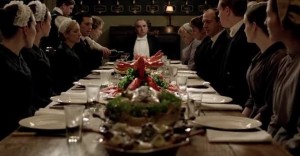 As we can see in this episode, the kitchen is filled with food that looks so, Downton.  Remember all the food from Edith’s first wedding? At least the servants were treated to the leftovers, even though they had little knowledge of what they were eating.

After she failed to woo curious socialites inside their home, Bertha instructs the party food to be dispatched to the Church, to which her husband George quips “I don’t know what the poor of New York will make of lobster salad.” The Russel’s chef Monsieur Baudin was less pleased. “Cooking for paupers…that’s not what I am used to”.

The main influences for the wealthy elite were French classics.  When you show off your social power, you serve rich and expensive ingredients, presented in the most fashionable French-named dishes. Extravagance was emblematic of the Gilded Age, very much as it was in the Edwardian era.

However, we do see the development of unique American dishes in this era.  Orginal dishes which appealed to the more wealthy were born in restaurant and hotel kitchens, like Oysters Rockefeller, Parker House Rolls, Boston Cream Pie, and Palmer House Brownies.

Meanwhile working classes developed their own traditional dishes based on recipes brought with them when they immigrated to the USA, and available ingredients.  American cookbook giants like Fannie Farmer  published The Boston Cooking School Cookbook and even opened up her own Cooking School in 1902. 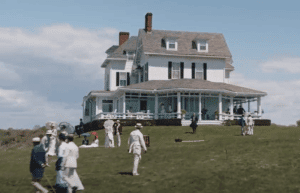 The English aristocracy had their country houses in the country side, the Americans had their summer houses.  A view of how the wealthy in America relaxed is shown in an outing of Mrs. Fish’s estate in Newport, complete with croquet, and badminton on the lawns. This scene was filmed at The Ledges which was the original summer house of the Cushing family, built in 1867 by high society and prolific Boston-based tea and china merchant, Robert M. Cushing.

In true gilded age fashion, the show was filmed exclusively in Rhode Island and New York, at recognizable jewels like the Breakers, Marble House, Lyndhurst Mansion, and many other grand properties. House Beautiful has rounded up a list of all 18 historic house museums that are featured throughout The Gilded Age‘s first season—all of which can be visited and toured in person.

Reviews are Coming In

Many critics have weighed in on the new series.  I am not sure this is based on the pilot or if they have been provided with the whole of Season 1.  Not particularly flattering in their comparison to Downton Abbey or the coverage of The Gilded Age Era.

Hello Magazine focused on the positive responses fans had to the new show: “The first instalment went down a storm with viewers who have taken to Twitter to praise the compelling drama, with one person writing: “The pilot was excellent. I’m hooked already. Finally, a good show to look forward to,” while another added: “#TheGildedAge on @hbomax is EXCELLENT! I can’t wait for episode two!!!!”

You may recall when Downton first aired the critics weren’t forthcoming with praise.  Historians were particularly critical and the Queen still chimes in with the odd missed attention to detail. I suspect that The Gilded Age will follow the same journey. Julian Fellowes is already working on Season 2.

I appreciated the DigitalSpy approach of comparing the shows to the times which they reflect:  “The jaunty, dramatic character of the overture is an insight into the tone of the show overall. Where Downton possesses a subdued, classic elegance that mirrors the notion of the polite, emotionally withholding British, The Gilded Age has energy and colour that is captured in the theme tune. That’s not to say Downton has been relegated to the fuddy-duddy cousin of period dramas, merely that the charm of that show hums with tension (rather than explodes) and quiet but tangible anticipation.”

The most significant difference between the two shows is accessibility.  The Gilded Age was originally slated as an NBC project but ended up with paid streaming on HBO.  One great way is to cozy up to your family members who have HBO, offering to bring a bottle of great wine or period dish for a viewing party.

#Royal Dishes: what ingredients that the #Queen forbade her family from eating according to @theroyalchef. Any guesses?! http://ow.ly/u51K50KSqRC

This is a great and easy #dessert to make in tribute to the #Queen. According to The Royal Chef #DarrenMcGrady, #QueenElizabeth couldn't get enough of this #nobake #chocolatecake. It was also #princewilliamsgroomscake #EatingRoyally #Englishcuisine https://downtonabbeycooks.com/royal-chocolate-biscuit-cake/