Parker House rolls have regained their place at the dinner table in recent years.  There is nothing more white and delicious than these “pocketbook rolls”, and when you are breaking your low carb regime for a treat, these are the best.

The name comes from The Parker House, founded in 1855, one of Boston’s oldest and most distinguished hotels. The rolls became popular all throughout New England, going by pocketbook rolls.

One of the hotel’s first guests was a lady from London who misplaced her diamonds and accused the chambermaid of theft.  The pastry cook heard the commotion and was so angry that his beloved was falsely accused that he picked up pieces of dough in his fists and slammed them into the oven. The buns came out with dents in the middle and as there was no time to make another batch they had to be served in the dining room as is. As with most kitchen mishaps turned famous, the buns were a hit.  They came out crisp on the outside and soft in the middle and so a new tradition was born.  The lady had found her diamonds, by the way.

Fannie Farmer is the grand dame of American cooking.  Her first cookbook published in 1896 as The Boston Cooking-School Cook Book under the name Fannie Merritt Farmer, became the cookbook that taught generations of Americans how to cook.

The cookbook has been lovingly updated by Marion Cunningham under the name The Fannie Farmer Cookbook.

This classic recipe for Parker House Rolls comes from the original cookbook. 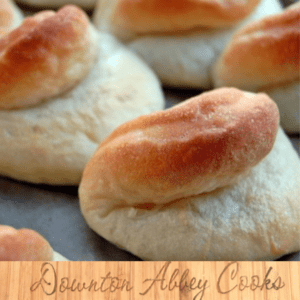 Parker House Rolls may also be shaped by cutting or tearing off small pieces of dough, and shaping round like a biscuit; place in rows on floured board, cover, and let rise fifteen minutes. With the handle of a large wooden spoon, or toy rolling pin, roll through the centre of each biscuit, brush the edge of lower halves with melted butter, fold, press lightly, place in a buttered pan one inch apart, cover, let rise, and bake.
Tried this recipe?Let us know how it was!

The #DowntonAbbeyANewEra review from @ebertvoices is the one I have been waiting for. “#Marvel Cinematic Universe for the #senior set”: we will take it! https://www.rogerebert.com/reviews/downton-abbey-a-new-era-2022