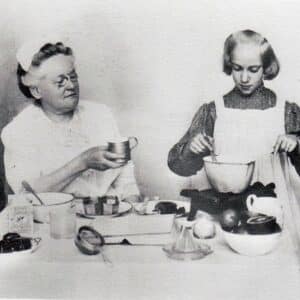 On August 23, 1902, pioneering cookbook author Fannie Farmer, who changed the way Americans prepare food by advocating the use of standardized measurements in recipes, opens Miss Farmer’s School of Cookery in Boston. In addition to teaching women about cooking, Farmer later educated medical professionals about the importance of proper nutrition for the sick.

Farmer was born March 23, 1857, and raised near Boston, Massachusetts. Her family believed in education for women and Farmer attended Medford High School; however, as a teenager she suffered a paralytic stroke that turned her into a homebound invalid for a period of years. As a result, she was unable to complete high school or attend college and her illness left her with a permanent limp.

When she was in her early 30s, Farmer attended the Boston Cooking School. Founded in 1879, the school promoted a scientific approach to food preparation and trained women to become cooking teachers at a time when their employment opportunities were limited. Farmer graduated from the program in 1889 and in 1891 became the school’s principal. In 1896, she published her first cookbook, The Boston Cooking School Cookbook, which included a wide range of straightforward recipes along with information on cooking and sanitation techniques, household management and nutrition. Farmer’s book became a bestseller and revolutionized American cooking through its use of precise measurements, a novel culinary concept at the time.

In 1902, Farmer left the Boston Cooking School and founded Miss Farmer’s School of Cookery. In addition to running her school, she travelled to speaking engagements around the U.S. and continued to write cookbooks.

In 1904, she published Food and Cookery for the Sick and Convalescent, which provided food recommendations for specific diseases, nutritional information for children and information about the digestive system, among other topics. Farmer’s expertise in the areas of nutrition and illness led her to lecture at Harvard Medical School.