The most famous recipe from Downton Season 5 is Spotted Dick, a lovely custard dessert with an unfortunate name.  It first appeared in the 1849 cookbook The Modern Housewife written by Alexis Soyer, but meat based versions date back to the medieval era.

What’s in a Name? “Spotted” refers to the currants or raisins in the pudding.  “Dick” is a little more difficult to explain, but essentially refers to pudding, or a reference to the German word dick, meaning thick or viscous. 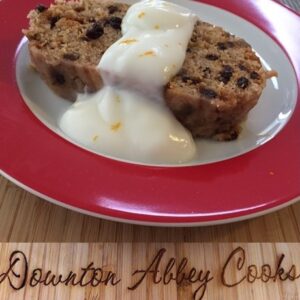