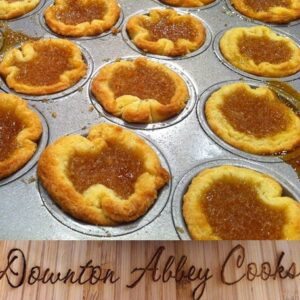 Welcome to my virtual tea party. “A Proper Tea is Much Nicer than a Nearly Nice Tea“- A.A. Milne.  Life is grand in the UK now that Season 3 is well underway, sad in the US as PBS won’t be broadcasting the new season until January. Americans however did get a glimpse of their favourite stars at the Emmys this past Sunday.

The British may have historically failed in other culinary areas*, but excel in the afternoon tea ritual.

Today’s treat is Treacle Tart, the first dish mentioned by name by Mrs. Patmore in Season 3.   It has long been a favourite sweet treat in English households: Harry Potter fans know that it was Harry’s favourite.

My Guide to the Tea Ritual 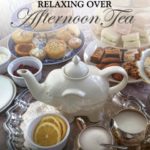 Taking a traditional “afternoon tea” is definitely a bucket list experience. To do it properly, I have created a handy guide to help you enjoy the experience. One follower reported this week she was thrilled to be able to find a tea house in her small town.  I suggested she use the tips to practice to become the queen of her tea house, train take on to take on London. Downton Abbey Cooks Online Guide to Afternoon Tea.

If you really want to get into the Afternoon Tea experience you can purchase an electronic version of Relaxing Over Afternoon Tea which contains a handy guide to hosting your own fundraising tea party.

If you have spent any time around the English or Harry Potter films, you may have heard of the term Treacle.  It simply refers to molasses. The most famous manufacturer of treacle is Lyle’s Golden Syrup, a light treacle.  It was recently declared Britain’s oldest brand, registering its trademark in 1904 and granted a Royal Warrant in 1911.  The company was founded by Abram Lyle, a Scottish businessman in the sugar business.  The sugar cane refining process produced a treacle-like syrup that usually went to waste, but Lyle found that it could be refined to make a preserve and sweetener in cooking.   Waste not want not.

Brand junkies take note.  The artwork on the tin is not what you would normally associate with food.  The tin displays the rotting carcass of a lion with a swarm of bees, bearing the slogan “Out of the strong came forth sweetness”.  A deeply religious man, the image refers to the story in the Book of Judges in the Bible.  Samson kills a lion on his journey to find a wife.  When he passed the same spot on his return he noticed that a swarm of bees had formed a comb of honey in the carcass. Samson later turned this into a riddle at a wedding: “Out of the eater came forth meat and out of the strong came forth, sweetness”.

Golden syrup is widely available, made either from sugar cane or sugar beets.  It is a key ingredient for Treacle Tarts.

There really isn't a good substitute for golden syrup to get the same result. Corn syrup is far too sweet. Luckily golden sryup is just a click away.

*English Cookery– the worst in the world?

While famous British chefs (Jamie Oliver, Nigella Lawson, Gordon Ramsay) have helped boost the reputation of English cuisine, I am pretty sure many food critics still compare some English fare with the quality of Branson’s soup that he attempted to dump on the General’s head in Season 2. Apparently, that reputation goes back hundreds of years. From Mrs. Beeton’s delightful book, Mrs. Beetons Book of Household Management, published in 1861:

IT HAS BEEN ASSERTED, that English cookery is, nationally speaking, far from being the best in the world. More than this, we have been frequently told by brilliant foreign writers, half philosophers, half chefs, that we are the worst cooks on the face of the earth.