I love talking tea parties as I thoroughly enjoy taking creative license to mix and match topics. It is like serving tea on mismatched teacups to your guests along with a lovely stacked tea tray of wee sandwiches, sweets and savoury treats. No one seems to mind, and everyone comes away with something they enjoy.

These tea talks were inspired by Christine, a follower who lives in France, who was curious about English tea traditions. Whether you take tea for pleasure, or for business as a rising business star entertaining clients, a little knowledge goes a long way.

Relaxing Over Afternoon Tea is a great way to learn etiquette, history of Afternoon tea and great recipes.

What Sort of Tea Drinker Are You?

If you aren’t sure what sort of tea drinker you are then you are in luck. Online Stores, Inc. and The English Tea Store Blog have created quizzes to help you decide.

Queen Elizabeth II celebrates her birthday twice, God bless her. She celebrates privately in April, and publicly celebrated in June. It was on her 21st birthday that she declared her dedication service to her people.

Lord D and I played a minor role of service to The Queen on Her Birthday, serving as official escorts to the Honorable David Onley, Lieutenant Governor of Ontario and his wife, Ruth Ann. His Honor serves as The Queen’s representative in Ontario, so we shouldn’t have been surprised that there is much protocol involved. But with the guidance of Peter Patry, Aide De Camp walked us through the process with much patience.

You can imagine that the Queen’s Birthday would be a busy day for Their Honours, but they were kind enough to share in the 25th anniversary celebrations for MATE/FCC, Mission for Advancement of Theological Education, a cause which has been close to Lord D’s heart for a number of years. Both Christians, Her Honour Ruth Ann Onley, an accomplished Christian singer, has performed at MATE events in the past, and had plenty of friends in the room. His Honour was pleasantly surprised to receive a special award for service to God and Country from MATE/FCC Executive Director Arnold Doobay.

I seem to have the Edwardian on my mind lately. I generally think 100 mile diet when it comes to fruits and vegetables of that era. But as I enjoy my morning banana I kept wondering, did Edwardians eat bananas? We don’t even see Sybil gracefully nibbling one and she was pretty progessive. It is not exactly as if England is in a tropical climate and you don’t see many banana desserts in Edwardian cookbooks, right?

According to Spanish history, Friar Tomas de Berlanga brought the first banana root stocks to the Western Hemisphere in the 1500s, with a Chinese variety sent to England, where it was named “Cavendish” after the Duke of Devonshire’s family. The English are determined gardeners were able and still do cultivate bananas and pineapples, but not on a large scale. I would imagine it might have been quite a delicacy in that period.

It was Fyffe, Hudson & Co. who brought bananas to England in the 1880s, importing bananas from the Canary Islands on a large scale. Fyffes continues to be synonymous with bananas in the UK. London and Liverpool were the first cities in England to be introduced to the banana, aided in 1901 with the introduction of the new refrigerated ships which meant that the cargo would ripen more slowly.

So bananas appeared to be plentiful, but were people eating them? I consulted Lynn Olver at Foodtimeline for advice; she is a wealth of information when it comes to food history. She found this article which might shed some light to the reason we don’t see many banana recipes. Perhaps bananas had not yet caught their stride as a staple in our kitchens:

“Although bananas are so cheap and plentiful, and can be obtained all the year round, they are too rarely seen on the table, except in the form of dessert. This seems a great pity, as, with very little trouble, they can be converted into delicious sweets imaginable.–How to Use Bananas, Lloyds Weekly News [London], February 26, 1905 (p. 9) 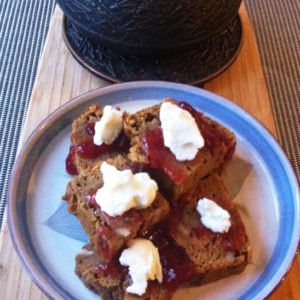 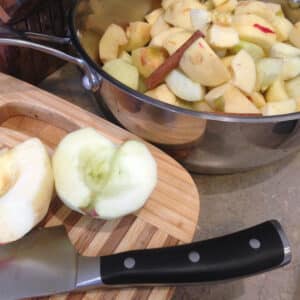 Don't buy applesauce when you can easily make your own unsweetened version which you can easily freeze. Shopping for discounted bruised apples at your grocer makes this a very economical solution. Use applesauce to replace oil and butter in your baking to make desserts heart healthy.
No ratings yet
Print Recipe Pin Recipe
Prep Time 20 mins
Cook Time 40 mins
Total Time 1 hr
Course Pantry Basic
Cuisine English, Victorian
Servings 6 cups 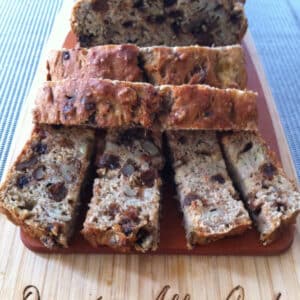 This is my go to banana bread recipe I make when our bananas start getting too ripe for our taste. To dress it up for tea I slice into finger lengths for the tea tray. Lord D loves nuts, chips and raisins in his bread.
5 from 3 votes
Print Recipe Pin Recipe
Prep Time 10 mins
Cook Time 1 hr
Total Time 1 hr 10 mins
Course Afternoon Tea, Dessert, Snack
Cuisine English
Servings 1 loaf

If you aren't motivated to make banana bread as soon as the bananas ripen, peel, slice and put in a ziploc bag and toss in the freezer, marking the number of bananas.  When it thaws you really don't have to mash as it is nice and soft.
Tried this recipe?Let us know how it was!