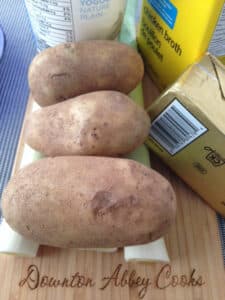 eek and potato soup is a simple dish that can be enjoyed in two ways, hot or cold.  There is some debate about whether it is a purely French or American creation, but the key players as told by the sous chef in this episode are Jules Gouffé and Louis Diat.

Jules Gouffé was the French Chef who created a hot potato and leek soup, published in Royal Cookery in 1869.   Food historians often use cookbooks to give credit for a recipe’s creation.

Louis Diat was a French Chef at the Ritz-Carlton in New York.  He recalled the leek and potato of his youth.  Apparently his brother used to cool it off in the summer by adding cold milk.  So he recreated the dish, named after Vichy, a town not far from where he grew up in France.   In the days without air-conditioning, cold dishes such as this helped keep wealthy patrons happily coming back for more. 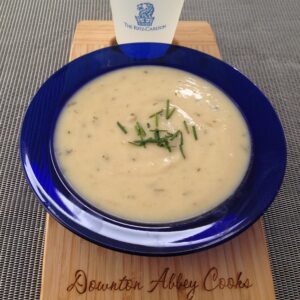 This is a versatile dish and it is easier to make than it is to spell. You can have leek and potato soup hot in the winter and cold in the summer. It is simple and delicious to make.
No ratings yet
Print Recipe Pin Recipe
Prep Time 10 mins
Cook Time 30 mins
Total Time 3 hrs 40 mins
Servings 6 servings