This is a classic french dessert, dating back to the 1600s, first printed in a cookbook which was served at the Palace of Versailles.  It is still enjoyed by the Royals in Buckingham Palace, but who doesn’t love cracking the crust? 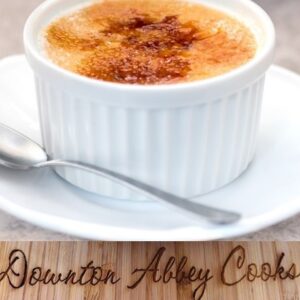 This is a classic french dessert, dating back to the 1600s, which was served at the Palace of Versailles. It is still enjoyed by the Royals in Buckingham Palace, but who doesn't love cracking the crust? You can easily make this keto by substituting the sugar.
No ratings yet
Print Recipe Pin Recipe
Prep Time 15 mins
Cook Time 20 mins
Total Time 3 hrs 35 mins
Course Dessert
Cuisine French, Gluten Free, Keto
Servings 4

While the French have claimed this dessert as their own, England, Spain and France all claim to have created the first version of the famous crème brlûée. Custards were very popular in the Middle Ages and in fact their popularity circulated across Europe so it is impossible to trace custard’s actual roots. Early French versions didn't burn the sugar on the custard, they used caramel disks.
Tried this recipe?Let us know how it was!

The #DowntonAbbeyANewEra review from @ebertvoices is the one I have been waiting for. “#Marvel Cinematic Universe for the #senior set”: we will take it! https://www.rogerebert.com/reviews/downton-abbey-a-new-era-2022