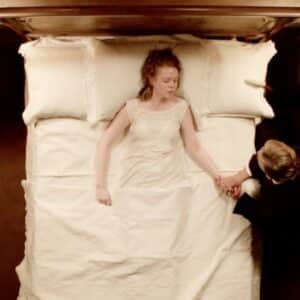 Amid all the uncertainty surrounding COVID-19, it may help to realize we are in familiar territory. Downton only briefly touched on the horrors of the Spanish Flu of 1918-19 in S02E8 resulting in the death of Lavina, paving the way for Matthew and Mary’s love story to play out. The story of the flu much more dramatic.

According to the Smithsonian Institute, the pandemic, which only lasted just 15 months, was the deadliest disease outbreak in human history, killing between 50 million and 100 million people worldwide, according to the most widely cited analysis. An exact global number is unlikely ever to be determined, given the lack of suitable records in much of the world at that time. But it’s clear the pandemic killed more people in a year than AIDS has killed in 40 years, more than the bubonic plague killed in a century.

The Flu began in the United States

Although some researchers argue that the 1918 pandemic began elsewhere, in France in 1916 or China and Vietnam in 1917, many other studies indicate a U.S. origin. The evidence is “strongly suggestive” that the disease started in the United States and spread to France with “the arrival of American troops.” Camp Funston had long been considered as the site where the pandemic started but now possibly points to an earlier outbreak in Haskell County.

Why was it called Spanish Flu?

When the flu swept through Spain, and sickened the king the press in Spain, which was not at war, wrote at length about the disease.  Unlike the censored press in warring countries, including the United States. Hence it became known as “Spanish flu.” By June influenza reached from Algeria to New Zealand.

Who was Affected and How Quickly?

As we learned in Downton, while Cora was also affected it was more often healthy young adults like Lavina who died. Death came within a matter of hours.

One physician wrote a colleague, “These men start with what appears to be an ordinary attack of LaGrippe or Influenza, and when brought to the Hosp. they very rapidly develop the most vicious type of Pneumonia that has ever been seen. Two hours after admission they have the Mahogany spots over the cheekbones, and a few hours later you can begin to see the Cyanosis”—the term refers to a person turning blue from lack of oxygen—“extending from their ears and spreading all over the face….It is only a matter of a few hours then until death comes…It is horrible….We have been averaging about 100 deaths per day…For several days there were no coffins and the bodies piled up something fierce…”

What proved even more deadly than the flu was the government policy toward the truth. When the United States entered the war, Woodrow Wilson demanded that “the spirit of ruthless brutality…enter into the very fibre of national life.” So he created the Committee on Public Information, which was inspired by an adviser who wrote, “Truth and falsehood are arbitrary terms….The force of an idea lies in its inspirational value. It matters very little if it is true or false.”

What is Different this Time

People are reacting to fear of the unknown in the same way, stockpiling of food and social distancing, and the economic ramifications are like those of 1918.  However, advances in our understanding of pandemics make this pandemic different.

The world was a different place in 1918.  It was impossible to test people with mild symptoms so they could self-quarantine.  Believing that it was just the ordinary flu, quarantines were limited to 2 days.

World War I did have an impact as many of the best doctors were pulled into military service leaving the general public less protected.  Soldiers in close proximity to one another also allowed the virus to quickly spread.

Doctors knew viruses existed but had never seen one — there were no electron microscopes, and the genetic material of viruses had not yet been discovered. Today, however, researchers not only know how to isolate a virus but can find its genetic sequence, test antiviral drugs and develop a vaccine.


What to do in  Self Quarantine