“Fish with something green is often seen on the dinner table at Downton. The garnish serves a practical purpose, as it gives the actors something to eat that isn’t going to be horrible after several hours under fierce lighting.  This was a genuinely popular way to eat fish, and in classic French cuisine, the garnish often dictated the eventual name of the fish.  While white fish by itself can be rather bland, overwhelming flavours can destroy its subtlety.  This recipe, like nearly any recipe called “Florentine”, uses spinach for flavour and colour. But unlike Italian fish dishes, it contains cheese.  It is ideal for people who aren’t sure they like fish.”  Annie Gray, The Official Downton Abbey Cookbook 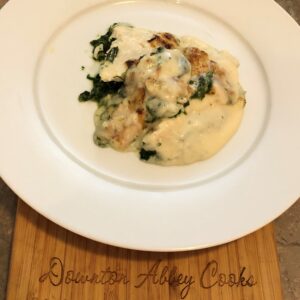 From the Official Downton Abbey Cookbook, this is a wonderfully elegant French fish dish for those who don't think they like to eat fish because there is a lot of lovely creamly sauce.
5 from 3 votes
Print Recipe Pin Recipe
Prep Time 20 mins
Cook Time 5 mins
Total Time 25 mins
Course Main Course, Main Dish
Cuisine As Seen on Downton, French, Victorian
Servings 4 servings

"The sauce here also masquerades as sauce Mornay and is very good with eggs, making it an easy alternative to hollandaise sauce for eggs Benedict. If you also add spinach you have eggs Florentine." Annie Gray, The Official Downton Abbey Cookbook When I made this dish I added all the poaching liquid to the sauce to thin it out. The fish was drowning in it which is likely why people who don't typically like fish will love it. Get your own Copy