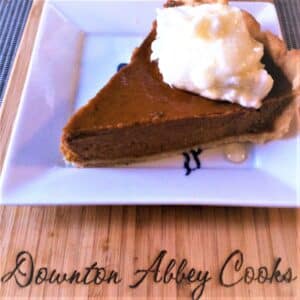 Fannie Merritt Farmer was an American culinary expert whose Boston Cooking-School Cook Book became a widely used culinary text. She is most recognized for promoting the use of measuring standards to help cooks replicate results.

Among her recipes is sweet potato pie, and as a Southern classic, it makes sense that included this in her cookbook. It is interesting to note, however, creamy recipes combining orange vegetables with sweeteners, spice and cream were known in Medieval Europe. Carrots were sometimes employed in this manner in England. Sweet potatoes (like pumpkins) were introduced to Europe in the 16th century.

Food historians tell us these new vegetables were greatly prized by some European kings and queens so when you have a sweet potato pie, you are eating like kings.

My granny's pie crust recipe
Tried this recipe?Let us know how it was!