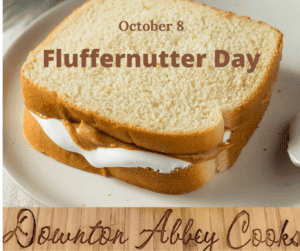 Today is National Fluffernutter Day in the United States.

If you haven’t heard of the term it is likely you aren’t from New England or know anyone from there.  In 2006 there was an effort to make fluffernutter the official sandwich of Massachusetts, but New Englanders with have to be content with having a national food day in its honor.

There would be no fluffernutter without the fluff so this day really is about celebrating the creation of marshmallow creme.  We can give thanks to the great great great grandchildren of Paul Revere, Emma and Amory Curtis of Melrose, Massachusetts.  Amory was highly intelligent but unfortunately did not have the funds to attend MIT.  He instead went into business founding a soda equipment company in the  1890s. He sold the company and to build a house on Crystal Street and in the basement created a marshmallow spread known as Snowflake Marshmallow Crème. In 1913 the Curtis Marshmallow Factory was established and Snowflake was the first shelf-stable marshmallow crème.

The recipe is a bread spread with peanut butter and Marshmallow Créme soon followed.  During WWI food rationing, the Curtis’ published a recipe for the “Liberty Sandwich”, using bread that was available at the time made of oats or barley.

The Curtis concoction, however,  is not the legitimate ancestors of what we know as Marshmallow Fluff.  Strangely enough four years after the Snowflake Marshmellow creme, another creator, Archibald Query was selling his own marshmallow cream door-to-door in Somerville. Query sold his formula to businessmen H. Allen Durkee and Fred L. Mower during the War, who rebranded it as Toot Sweet Marshmallow Fluff, which eventually became the Marshmallow Fluff we see on shelves today.