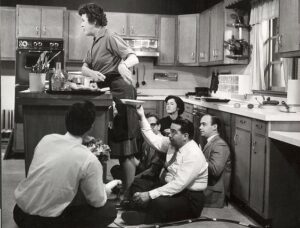 Today we celebrate Julia Child’s 108th birthday. She died 2 days before her 92nd birthday back in 2004.

A pioneer in the culinary world she introduced American housewives to the joys of cooking French Cuisine. She bravely took the teaching concept to a whole new level on television. PBS’s national broadcast of The French Chef reached housewives across the country; women were now able to bring a bit of France into their homes.

There is now a multitude of schools that train the next generation of professional chefs, but Julia taught the basics of french cooking to home cooks, and fuel a desire for some young men and women to become chefs themselves.

So what is the Connection with Downton Abbey?

The common thread is French cuisine and how it was introduced to a new country. There were pioneers who brought French cooking to wealthy Britons on a grand scale in the Edwardian era, and then there was Julia who took it to another level in America.  Her greatest achievement was to teach French cooking to Americans on a mass scale.  A TV pioneer, she came alongside us in our homes as a kindly aunt who was outgoing, funny, fearless and full of encouragement.  It was the cooking show which really changed how cooking could be passed from one generation to the next. Many of us still learn to cook standing next to a more experienced cook, and not so long ago that was really the only way anyone would have learned unless you were really good at reading cookbooks.  You can see how cooking was so regionalized; cooks passed along what they knew.  Julia really was the first to give us all the opportunity to “apprentice” with someone who had the passion to teach something new and have fun in the process.

Julia’s first task was to translate recipes and document french techniques in a format Americans could understand, but the best selling cookbook was not a new concept. In the Victorian era,  Mrs. Beeton gave the English their first mass-produced cookbook.  Mrs. Beeton was a publisher, not a cook, but carefully collected and organized “receipts” from all sources, and reorganized them into a new format which listed ingredients and then a method for preparation. The format stuck and is still how we share recipes today.

In the Edwardian era, the English gentry followed King Edward VII’s passion for French cuisine.  There was a great demand for trained male French chefs in England to head up kitchens in grand country houses like Downton Abbey.  I have written about the great French chef Auguste Escoffier who became famous for his own books on french cuisine, his success as a restauranteur, and head of his own cooking school.

If an English Lord could not afford or find a male french chef, the next best thing was an English female cook.  This created opportunities for those who had learned their craft through apprenticeship.  Introducing Mrs. Patmore, who reigned supreme in the kitchens of Downton Abbey.  The Dowager was not particularly impressed with Mrs. Patmore’s cooking, and she was likely not classically trained.  She would have learned how to cook at the side of a more experienced cook in other households, where there may have been a french trained chef.  She, in turn, trained her staff, like Daisy, who could eventually leave to head a kitchen of her own at another grand house.  As you may recall, both Mrs. Patmore and Daisy gave Lady Sybil a lesson or two.

Just a few of my favourite Julia Child recipes I have  shared here:

So in remembrance of this great lady, open a bottle of great French wine and flip through Mastering the Art Of French Cooking , or rewatch Julie & Julia.