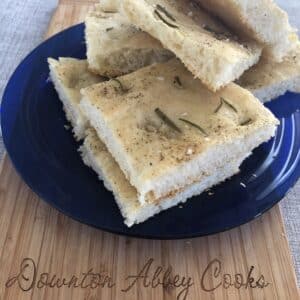 With its roughly dimpled surface and craggy interior, focaccia has become mainstream American, even appearing in some fast-food restaurants.

The Latin root of the word focaccia is ‘focus’ and refers to cooking by a fireplace or hearth. Literally a focal point for the family, a place where the dough was baked over hot stones, fire and she.

Interestingly, the flat bread of ancient Sicily was called ‘pitu’, a variant of the Greek ‘pita’ and more than likely the word which evolved into ‘pizza’.  Various versions of this Italian bread can also be found in other parts of the world. In Burgundy, focaccia is called foisse or fouaisse, in other areas of France it is known as fougasse. In Argentina, it is widely consumed under the name fugazza. The Spanish call it hogaza.

While Americans may be used to soft, thick focaccia, this version comes from King Arthur Baking Company is closer to the classic Italian bread: a rustic, everyday loaf that’s usually a bit thinner than American-style.

Depending on how much olive oil you use, the size of your bake and how long you bake you can customize the recipe to be crusty and chewy, thin and crisp, or whatever style the family prefers.

My tip is to cut into larger pieces so you can easily them into toaster to rejuvenate the next day for a great snack.