An empire biscuit is one of the many Scottish desserts popular across the United Kingdom. Formally known as the German biscuit, the dessert is two cookies wrapped around a layer of jam or cream that binds the cookies together to form one solid treat.

Traditionally, the biscuit has a layer of icing across the top cookie with a cherry or piece of candy planted in the center.  Depending on the area, the empire biscuit is also called a double biscuit or imperial biscuit.

With origins in a German-speaking Central European country, the Empire Biscuit started life in the UK being known by names such as the Deutsch Biscuit or, more commonly, the German Biscuit. Unfortunately, the outbreak of WWI meant that all this was to change. Britain found itself facing both Germany and the Austro-Hungarian Empire in the war, so Deutsch, German and Linzer Biscuits all suddenly felt like unpatriotic names.

Because of this (bear in mind this was still in the days of the British Empire), the more patriotic name of Empire Biscuit was born. 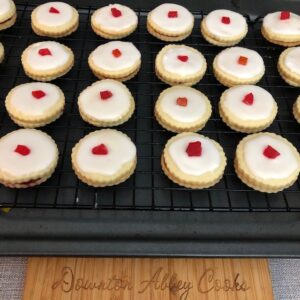 Keyword empire Cookies, Holiday Desserts
Tried this recipe?Let us know how it was!