Social media is all abuzz this week with the announcement from Downton Abbey producers that Shirley MacLaine has been cast to play Martha Levinson, Cora Crawley’s mother in Season 3. Perhaps any crumb about the new season would be eagerly gobbled up by starving Downton fans who have seen all previous episodes (some many times…guilty). Even the huge feast of the Christmas Special could hardly keep us satisfied for long.

But this casting news is no small crumb. Downton Abbey has drawn a wide huge audience from the United States, many from a younger demographic than what PBS normally attracts. Brian Wheeler, BBC News Washington correspondent recently wrote a great piece: The US Cult of Downton Abbey, examining the popularity. Some insights include great looking young people both upstairs and down, American fascination with British Aristocracy, a glimpse into a simpler time, and it’s free on PBS, so that everyone can enjoy it.

Sparks are Sure to Fly

The first leap fans have made is that Martha will certainly be an formidable match for the caustic Violet, who has been quite public about her views about Americans. I particularly enjoyed her “wigwam” quip to Cora–Canadians ensure references to the”igloo’s”we apparently all live in.

This clip foreshadows the relationship Violet is to share with Martha. Oscar winning actress Shirley MacLaine will surely not disappoint in generating some memorable drama on the show.

Anglo American Relations in the 1920s

This is all great for ratings, but the brilliance of the choice ties in well with history. Season 3 will be set in the 1920s, an important period in history which signalled the rise of the United States and decline of Britain as a world power. What better symbolism of the struggle for world domination than cat fights between two feisty old ladies. “Without our family money, Downton would have been ruined” Pow! “Oh good, let’s talk about money”. Bam!

As a foodie I am delighted to see the introduction of another major American character. Cora follows the British traditions in her newly adopted homeland. Her mother, how ever, will likey have much to say about broadening their horizons to American ideas of the time (think The Great Gatsby). Including food. I can also imagine her own maid packing newly created American sweets like Oreos, Wrigleys Gum and Twizzlers. I see Daisy in a sugar coma and Mrs. Hughes scraping chewing gum out of carpets.

The introduction of American influences into Downton opens the door for me to explore more of the amazing foods invented by Americans in that era. Cupcakes (aka fairy cakes), for example is every girl’s idea of a good time. Red velvet cupcakes are my favorite, which were created around WWI which used beets, providing the red color.

The American English Muffin vs. The British Crumpet

Americans also gave us those lovely muffins we enjoy in North America as a quick breakfast. Visiting relatives from the UK will not immediately recognize the tray of muffins you put in front of them. You may also think that English Muffins are a British invention when in fact they are an Americanized version of the English. Both are yeast based and relatively simple to make. Try them yourself. Which is better? Who cares? Either way your tummy will thank you.

So the battle of between Violet and Martha may boil down to the preference between crumpets and english muffins; who cares which is better as long as we get a taste. 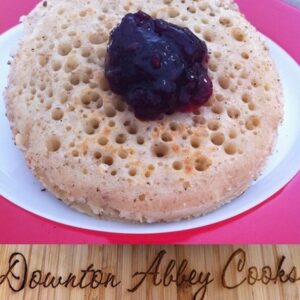 How to Make Crumpets

Special Equipment
Tried this recipe?Let us know how it was! 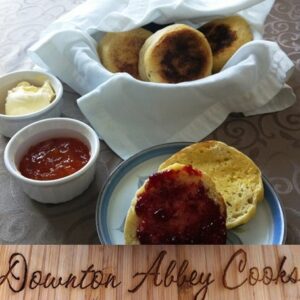 Make Your Own English Muffins