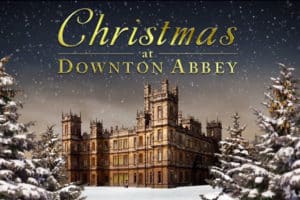 The rendering of a snowy Highclere Castle is the perfect image for a Christmas card, a tradition that dates back to 1843. Sir Henry Cole, a Victorian A-lister, was in the unenviable position of having to answer the stacks of Christmas letters he had received. In desperation to keep up with social graces, he came upon the idea of an illustration that could be mailed; a printer created 1000 cards printed on stiff cardboard which became the very first Christmas card.
While it took several decades to catch on across Britain and the United States, Cole’s social circle immediately took to this time saver.
As for Christmas letters, an old English custom, the tradition still carries on. I still receive letters from family and friends, sometimes accompanied by baked goods.

The First Commercial Christmas Card is for Sale 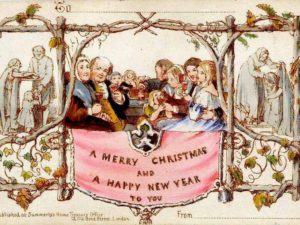 You may be interested to know that one of the original copies of the first Christmas card was for sale last year, at the price of $25,000.

But the hand-coloured lithograph card — which features a family and a small girl gathered around a table, enjoying glasses of wine — caused a scandal among the UK’s temperance movement, who were calling for abstinence from alcohol, Justin Schiller, president of Battledore Ltd., the New York antiquities dealership that currently owns the card. The card proved so controversial that it was three years before the publisher produced another, he added.
A thousand copies of the card were originally printed to be sold for a shilling each — but it is now estimated that fewer than 30 examples are left, with some on display in museums or for sale.

In spite of the ongoing pandemic, I still do keep up with my holiday baking, limiting our sharing with our closest neighbours, delivered to the doorstep. There are always extra available for our own munching and for the few family guests, we will have over during the holiday season.

During the lockdown, they are the only people we had a chance to see as we pass each other during our daily walks.  They are bonds that we have continued this year.

To make the treats even more special and COVID friendly, I packaged in clear treat bags, printed little labels and secured them with Christmas tags.

These are some of the favourites I still make each year. 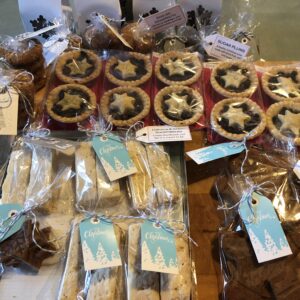 For a complete list of Christmas treats, and fun food history to amaze and amuse, click the link for Holiday Dishes or Christmas Desserts.

Downton Gifts for Everyone

Here is a list of my top Downton gifts that you can order directly from Amazon.  And while you order for yourself, why not order for family and friends and have it delivered directly to them.  Amazon is such a time saver.

Until we dine again, Lord D and I wish you and yours a very Happy Christmas.