PBS fans are midway through Season 2 of Downton Abbey. UK viewers/DVD collectors who have seen all episodes could be feeling smug in their knowledge–me included–but the series is so rich that I have no problem watching the older episodes a few more times. Besides, September is a long time to wait for Season 3 and life in the 1920s.

The Bates Saga of Episode 3,4

In the past couple of episodes, we have learned that Mr. Bates, played by Brendan Coyle (he tweets @brendancoyle99), is back on the scene. In Episode 3, Mary tells Anna that it was Mr. Bates she saw in the village in Episode 2. Sir Carlisle was more than happy to track him down, likely in hopes that Mary might be more agreeable to his marriage proposal. Anna’s true love is working at the Red Lion (an inn/pub) in a nearby village. Anna promptly (or as quickly as public transporation of that era will take you) shows up at the Red Lion to confront him. Loving conversation ensues.

In Episode 4, Daisy overhears Thomas tell O’Brien that Mr. Bates was spotted working at the Red Lion; she blabs the news which spreads like wildfire to Lord Grantham. He then takes it upon himself to break the news to Anna who already knew (way to steal his thunder); she explains that Bates can’t come back to Downtown since he left on bad terms.

This prompts Lord Grantham to take a trip to the Red Lion himself–likely in a timelier fashion than Anna–to mend fences and bring him home. All this foils Molseley’s grand plans to become valet to Lord Grantham. (My money is on him going “postal” in Season 3). Note:  he actually he did get a lot tipsy in the S3 Christmas episode.

I was surprised that Bates didn’t get fired with all the personal visitors he had, plus refusing to serve Thomas’ friend. Still, from the interior shots, it looked like a charming little establishment. With all that traveling, I am sure Anna and Lord Grantham might have taken a glance at the menu. Whatever might they have been served?

I am so glad you are curious. I just made a pub dish for a Robert Burns styled Supper last night (potluck-how Scottish is that) and wasn’t sure how to include the recipe into a post on Episode 4.

You will find this dish in pubs around the world, but could have also been served downstairs in the servants hall. I dare say that the Crawleys would not eat meals made of cabbage.

The wee sweet Scottish hostess for last night’s event asked us to bring a main course dish, but did not specify a preference. I was not going to show up with a shepherd’s pie (there ended up being 2), but thought about some sort of stew. A greater power had stepped in and helped me narrow the choice.

Be Careful What You Ask For

Lord D mentioned one day that he would love some coleslaw, a dish he enjoyed the many years he was a vegetarian. I love to please My Lord and bought a small cabbage to make some slaw. When I cook (my husband is making a lovely pork roast tonight) I am both Daisy and Mrs. Patmore so employ whatever tool works best. In this case my mandoline made handy work of shredding cabbage and carrots. I ended up with an enormous bowl of slaw. I had the foresight not to make dressing for the lot. After 3 days of raw cabbage with every meal, Lord D (my husband) cried uncle, leaving me searching for another way to use up the shredded slaw. And then it hit us: colcannon. A traditional one pot dish, it is found all across the UK, known by a variety of names (colcannon, bubble and squeak, rumbledethumps, kailkenny). Essentially it is a mixture of potatoes…and cabbage! Since I was asked to bring a main dish meal I added sauages to the mix. It is traditionally served in Ireland for Halloween.

Colcannon is a lovely Irish comfort food combining potatoes and cabbage, all mashed together. It can be served as side dish, or if you add sausages it can become a main course feast.

At Halloween, it served to predict marriage. Charms were hidden in the mashed potatoes and any unmarried girl who found one would place socks with spoonfuls of Colcannon and the charms on her front door handle. The first man to enter the house was her intended.

Colcannon was traditionally used for predicting marriage on Halloween. Charms were hidden in the mashed potatoes and any unmarried girl who found one would place socks with spoonfuls of Colcannon and the charms on her front door handle. The first man to enter the house was her intended. Goodness, that must have been a worrying time waiting to see who arrived. 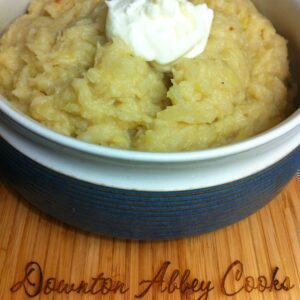 Colcannon is a lovely Irish comfort food combining potatoes and cabbage, all mashed together. It can be served as side dish, or if you add sausages it can become a main course feast.
5 from 1 vote
Print Recipe Pin Recipe
Prep Time 45 mins
Total Time 45 mins
Course Main Course
Cuisine English

If you have leftovers, try making these amazing Colcannon Cakes
Tried this recipe?Let us know how it was!