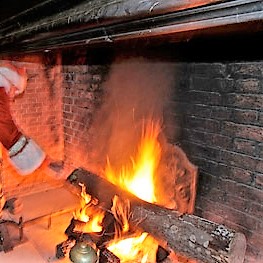 If you missed Stir Up Sunday this year so no homemade Christmas Pudding or Fruitcake on your holiday sweets table, you can always impress your family and guests with another English tradition, the Yule Log cake or bûche de Noël as it is known to the French.  Essentially it is a rolled sponge cake decorated to look like a tree branch, with the added fun of adding meringue decorations such as mushrooms and/or holly sprigs, and any other sort of edible decoration.

The history of the Yule log cake dates back well before the medieval era. Celtic Brits and Gaelic Europeans would gather to welcome the winter solstice in December.  There would be feasts celebrating Winter solstice when the days would start to become longer.  The Yule log came into practice as a means to cleanse the air of the previous year’s events and to usher in the Spring.  Families would burn huge logs decorated with holly, pinecones or ivy over the twelve days of Christmas.  Wine and salt were also often used to anoint the logs. Once burned, the remaining log was kept for the next year, and the log’s ashes were valuable treasures said to have medicinal benefits and to guard against evil. The practice of the Yule log continued with the advent of Christianity, albeit on a smaller scale.

Families may have burned a log on Christmas Eve, but smaller hearths became the norm so huge logs were impractical. Those small hearths, however, were perfect for baking cakes. We don’t know who exactly made the first Yule log cake, but judging from the individual ingredients it could have been as early as the 1600s. Marzipan and meringue decorations, two of the most popular choices for Yule logs, appeared on many a medieval table.  Sponge cake, which often constitutes the base of the log, is one of the oldest cakes still made today.