Tarts are thought to have evolved as a manner of layering food on a crust. Short crust pastry (as compared to pie pastry) is thought to have been first commonly used in the 16 century. This method of preparation was popular with nobility, viewed as superior than pies consumed by the commoners.  King George V, for example, was a big fan of apple tart.

This is a quick and easy apple tart recipe using packaged puff pastry. 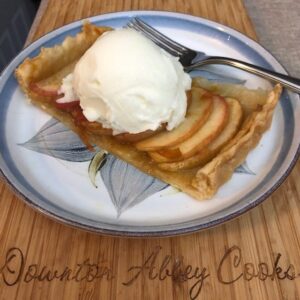 Shopping
Tried this recipe?Let us know how it was!