Happy Birthday Isabella Beeton, best known as Mrs. Beeton, the Victorian Domestic Goddess. Her cookbook  Mrs. Beeton’s Book of Household Management published in 1861 when she was only 23, was an instant success.  It sold a whopping 2 million copies in 1868.

March 12 marks her birthday.  Had she lived in biblical times, Bella would have been a mere child compared to Adam who lived a total of 930 years (Genesis 5:5).  As it was she died at age 28 of complications from childbirth.  Speaking of which, we can thank Eve for labour pains as punishment for eating the apple from the forbidden tree: “I will make your pains in childbearing very severe” (Genesis 3:16).

Mrs. Beeton’s appeal has endured for well over a hundred years, most recently achieving renewed celebrity through her influence on Downton Abbey. Series creator Julian Fellowes used her work to stage the show’s dinner scenes, and producers used recipes from her famed cookbook.  Other cooks around the world continue to be inspired by her work:  my other tribute to Mrs. Beeton and her recipes are sprinkled throughout this site.  I own Mrs. Beeton How to Cook which is a wonderful book, the joy of which is that Gerald Baker has painstakingly converted the recipes for easier use.

The volume of work she produced at such a young age is impressive. As eldest of 21 children, it would explain where she may have picked up some tips. She married a publisher which explains how she may have been published.  But the big surprise about Mrs. Beeton was that her persona was manufactured to help sales.  She didn’t cook, and was a small slip of a woman who preferred working at her husband’s publishing house than “keeping house”.  She published under the name “Mrs. Beeton” to give her credibility.  The facade was maintained after her death, as her publishers continued producing material under her name.

Also known as Mrs. Beeton’s Cookbook, the book contains 1,112 pages, and over 900 recipes illustrated with coloured engravings.  As an editor who never claimed to have original content, Mrs. Beeton saw the need for providing a guide to Victorian women on how to run a household with fashion tips, child care and animal husbandry advice, as well as the hiring servants.  What she lacked in originality she made up for in innovation.  She was the first to organize recipes as we see them today: listing ingredients at the beginning of the recipe and to indicate the length of time to cook dishes.  She even listed the costs, and what seasons to best enjoy the dishes, promoting the novel idea of buying local and in season.

Celebrating The Life of Mrs. Beeton

While her work speaks for itself as the legacy she left behind, there is some biographical materials available to learn more about her.

What would a birthday celebration be without cupcakes?  A double celebration, my father also celebrates his birthday on this day.

Bella would have known these as “fairy cakes”, but I believe that Brits now also call these lovely little cakes by the American name “cupcake”.  As a modern woman, I thought she might appreciate this recipe from Gourmet magazine, adapted from a rich chocolate cake first served in the late 1890s at the Wellesley Tea Room, a genteel establishment catering to students at the well-known Massachusetts women’s college.

So tip your cup and lift up your cupcake, scone or biscuit today and say “Happy Birthday, Mrs. Beeton, your legacy lives on with us”. 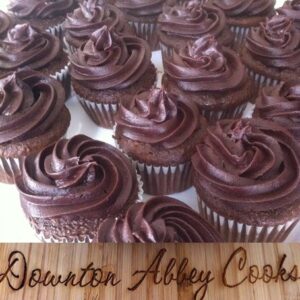 This recipe was first served in the late 1890s at the Wellesley Tea Room, at the well-known Massachusetts women's college. Because of its dense richness, I love to make as celebratory birthday cupcakes.
5 from 1 vote
Print Recipe Pin Recipe
Course Dessert
Cuisine American
Servings 24 cupcakes