Waffles have been in existence since there were batter and hot rocks, but their name has changed over the centuries.  In the 1200s craftsmen began forging irons into a honeycomb pattern, named “wafla” after the part of a beehive.  The religious connection is clear as the pattern was said to look like interlocking crosses. They were sold just outside churches during the penitential seasons of the year.

By the sixteenth century waflas were served in all levels of society. The rich were able to add eggs, milk and honey to create tasty waflas. The poor had only poor flour and water for their thick waflas. In 1620 the Pilgrims brought wafles to America. They learned this skill from their time in Holland. In 1735 waffles appeared in print for the first time with two f’s.

When my father had heart issues a number of years ago I experimented with a number of recipes to come up with the best heart-healthy waffle which everyone could enjoy. The ingredients are found in most kitchens so I often will sneak down to my host’s kitchen early in the morning and whip up a batch as a “thank you” for having me over. 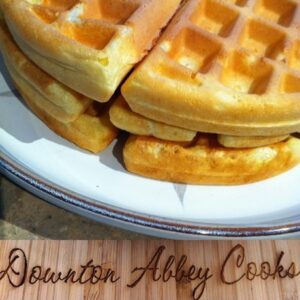 When my father had heart issues a number of years ago I experimented with a number of recipes to come up with the best heart-healthy waffle which everyone could enjoy.
4 from 12 votes
Print Recipe Pin Recipe
Prep Time 10 mins
Cook Time 10 mins
Total Time 20 mins
Course Breakfast
Cuisine Edwardian
Servings 4 medium-sized waffles

*Use your extra egg yolk for truffled egg toast.
Tried this recipe?Let us know how it was!