While Christmas in North America is a month long buildup of festivities, reflecting a melting pot of religious, cultural and secular traditions, New Years is more of an after thought, one last party before getting back to business. In Scotland however, Christmas is a low key celebration with a build up to New Years, called Hogmanay, the biggest party of the year. Since the Crawleys visit their scottish relatives in the S3 Christmas episode I thought it fitting to pay tribute to the great feast.

Throughout Scotland Hogmanay is filled with all kinds of festivals, parties, bonfires and, more recently, fireworks. Edinburgh’s Hogmanay Festival lasts for days and includes one of the most spectacular fireworks displays in the world.

Some of the Scottish traditions have become part of our own New Year’s Eve celebrations. We sing Auld Lang Syne at midnight and make New Year’s resolutions, both invented by the Scots.

Downton Abbey Season 3 Christmas Episode- A Journey to the Highlands

The Season 3 Christmas episode was broadcast to UK viewers on Christmas Day.  Unlike the previous Christmas special, it was not set at Christmas time.  The episode follows the Crawleys on a visit to the Scottish Highlands to visit their cousin “Shrimpie”, the Marquess of Flintshire.  The party left most of Downton’s servants behind, who made merry back in Yorkshire at a fair.  I am still digesting all the events that occur in the two hour episode and I don’t want to give away any spoilers, but the common thread appears to be that many characters see happiness just beyond their reach.  It definitely has a different feel from last year’s Christmas episode, but life moves on whether we wish it to or not.

What to Enjoy on Hogmanay

There are a number of traditional recipes which are enjoyed on Hogmanay. Shortbread, mincemeat pies, as well as Black bun (recipe is in my cookbook) are favorites. 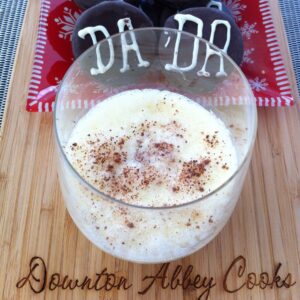 Traditional Toasts:
Keyword Downton Abbey Recipes, Downton Christmas
Tried this recipe?Let us know how it was!

For the Downton Fan