Croque Monsieur, “Crisp Mister” is a hot ham and cheese sandwich but it sounds so much tastier with a french twist. The earliest written reference is traced to Proust’ novel  À la recherche du temps perdu (In search of lost time) in 1918.  However, Croque Monsieur started to appear on Parisian café menus much earlier, around 1910. It is rumoured that they were first created by workers who accidentally left their ham and cheese sandwiches on hot radiators while they worked.  The finishing café touch was to grill the sandwich until crisp and golden. 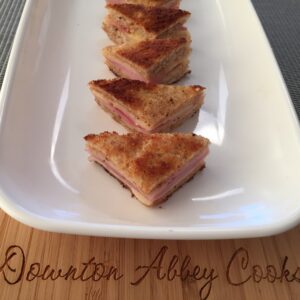