January is almost behind us but we have had plenty of distractions to keep our mind off the short days and long winter nights.  Not only did Downton Abbey won Best Drama at Britain’s National Television Awards last week, they picked up the Drama Ensemble Award at last night’s SAG awards.  Joanne Froggatt was so kind to specifically thank us viewers for our support.  You can view the “ensemble” acceptance speech below in the Downton Dish section.

And if that wasn’t exciting enough, Scots around the world celebrated poet Rabbie Burns this weekend (more below).

In tribute to the Russian refugees who Rose adopted and whom Violet has a connection with, this week’s dish is Beef Beet Borscht, a traditional Russian dish.  It is hearty healthy and inexpensive soup, perfect to feed your own army during the cold winter months.

Season 5 of Downton Abbey finally arrived in North America, broadcast on PBS at the beginning of this month, seen Sunday nights at 9 PM. We are now half way through the season. Some appetizing articles to whet your appetite while we wait for the next course of Downton.

What happened in S5E4

A quick recap of what went down and upstairs this past week. Love is the air for some:

My favorite fun quote: (Robert to Violet): “How is your old beau managing, Mama? Prince Thing a Ma Jig.”

On January 25, Scots around the world celebrate the birth of famous Scottish poet, Robert Burns. You know at least one poem, “Auld Lang Syne’ which we sing on New Year’s Eve, written in 1788. Traditional Burns Suppers are often held the weekend before or after his actual birthday- there is scotch involved. I have been lucky enough to have been invited to a few annual celebrations. This is a very serious event with a set program complete with bag pipes, and speeches in an language which barely resembles English. The main event is the piping in and then address of the haggis (sheep’s stomach stuffed with oatmeal mixed with offals). Toasts with scotch does help some summon the courage to actually eat the haggis. I happen to be a big fan.

If haggis is not your cup of tea, you could like to try other  Scottish dishes, how about:

Print Version:  You can order on Amazon. The full book is 450 pages and will contain famous Downton recipes..  The not so great news is that with the size of the book, Amazon needs to charge Lady Mary prices to recoup their printing costs.  Stay tuned on a lower cost alternative.

History of the Soup Kitchen

Food relief has been a main stay of humanitarian missions in third world nations, but unfortunately bread lines are no longer just a distant memory of The Great Depression in the Western World. The current economic climate has again made food banks and soup kitchens a necessity.

While he was hardly the first person to come up with the idea to feed the poor, American born Count Rumford has been credited with establishing the first soup kitchens. Born Benjamin Thompson, Count Rumford is famed as a scientist, a diplomat, military administrator, inventor, culinary expert, philanthropist and social philosopher. He also earned well-deserved reputation for being an arrogant and abrasive, but then again so did Steve Jobs.

He fled to Britain during the American Revolution, labelled as a British Loyalist. There are a few different accounts as to how the soup kitchen evolved after that (in the late 1700s). He had earned the title of Count from the Bavarian Government. In a plan to rid Munich of beggars, The Smithsonian blog explains that he had the army round up beggers and their children, putting them into workhouses to make military uniforms. The workers needed to be fed and Rumford created a nutrient rich soup make of peas, barley, and broken white bread (the invention of the crouton), to serve.  Soon soup houses were established throughout Europe, England and the United States to feed the poor. In London, as many as sixty thousand people were fed daily from Rumford’s soup kitchens.

Rumford’s innovations in the kitchen also included the cast-iron Rumford stove (the first commercially available kitchen range), which kept in heat and allowed temperature to be regulated better than on an open hearth; a pressure cooker (though not necessarily the first one); and a drip coffee maker.

Borscht or Borshch was once enjoyed by the Romans, with beets and cabbage grown specifically to be enjoyed in the soup. The modern version as we know it started to appear in the 15th century. Did you know that beets were prescribed as an aphrodisiac?
An unproved food legend revolves around a story of the Cossacks at war in the 1600s. Feeding four thousand Cossacks in a camp was problematic, everything edible went into the soup pot, resulting in a enjoyable mixture of vegetables and meat.
Over the centuries there have been a number of varieties of developed. I have included most of the ingredients used, and you can pick and choose. In my family we don’t use cabbage, and we julienne our vegetables (cut into thin strips) while others shred them. It is just as enjoyable without meat. I love mine with vinegar at the end along with the dollop of sour cream. All have the distinctive red color, and are best prepared the day before to let the flavours blend. 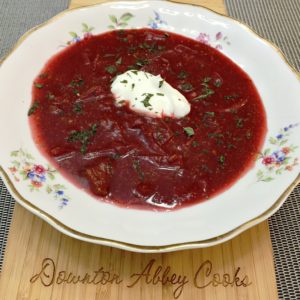 Borscht or Borshch was once enjoyed by the Romans, with beets and cabbage grown specifically to be enjoyed in the soup. An unproved food legend revolves around a story of the Cossacks at war in the 1600s. Feeding four thousand Cossacks in a camp was problematic, so everything edible went into the soup pot, resulting in an enjoyable mixture of vegetables and meat. So use what you have on hand. It is just as enjoyable without meat.
5 from 1 vote
Print Recipe Pin Recipe
Prep Time 30 mins
Cook Time 1 hr
Total Time 1 hr 30 mins
Course Soup
Cuisine Ukranian
Servings 10 servings

You can use stock in a box, but try making your own beef broth.
Tried this recipe?Let us know how it was!

Bone broth is the latest in health trends. Grandmothers would be so proud that what is old is new again. Make your own beef broth for soups or just to enjoy on it's own. It freezes really well.
5 from 1 vote
Print Recipe Pin Recipe
Prep Time 30 mins
Cook Time 3 hrs
Total Time 3 hrs 30 mins
Course Soup
Cuisine English
Servings 10 cups