Scotch eggs (aka Scots eggs) first surfaced in early 19th century British Isles. Even though the ingredients suggest it should be eaten as a breakfast food, it is most often served as cold snack in pugs or at picnics. Its origin is unclear although it could possible be a descendant of a form of Indian Kofta.  …the first printed recipe was in Mrs. Rundell (…1806), and suggests that the Scottish origin of the item was pointed up by its appearance in Meg Dods (1826), where it is described as being eaten hot with gravy, a practice also recorded by Mrs. Beeton (1861).” 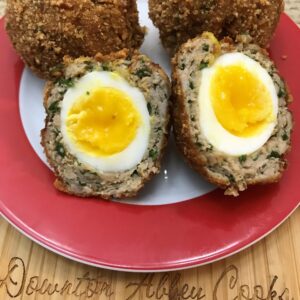 The proper way to eat scotch eggs is to cut in half or quarters.  It is not meant to be a hand food!
Tried this recipe?Let us know how it was!