“Shut the French Window”!  The quote above comes from Phyllis Logan’s (Mrs. Hughes) acceptance speech at the 2013Screen Actor’s Guide Awards. It has quickly become my own catchphrase.  You can find the link to the full video below.

You may find my Online Guide to Afternoon Tea helpful in understanding traditions and recipes to help you host your own tea party with family and friends.
Today’s treat is the colorful Battenburg Cake. 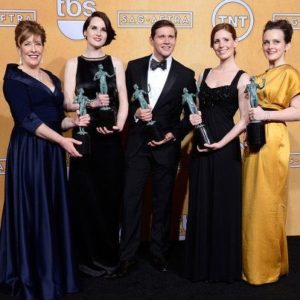 I had a great time last week cooking with fellow writers and foodies including Voula Halliday and Signe Langford, cooking Scottish dishes in honor of Robert Burns birthday.  Our hostess, Valerie Howes, Food Editor for Reader’s Digest Open Kitchen, arranged for us to test drive the amazing AGA Cookers. Cooking facilities and food was graciously donated by The Grange for this private event. When the AGA was first introduced into the UK market in 1929 it quickly became a prized possession in English country houses. Perhaps Mrs. Patmore will get one in Season 4.  It was the most unreal stove I have ever used. The left burner is for boiling, the right for simmering.  You simply move your pot(s) around to select the heat you want.  There are also multiple ovens for different types of baking or roasting.  Very cool. It was like cooking on Mrs. Patmore’s coal stove and in the future all at the same time.  Those who own them are totally devoted to their AGA, including Lady AGA.

The star of the menu was Balmoral Chicken, chicken stuffed with haggis.  There was also Culllen Skink, and I was on “team dessert” with Deborah Brewster making Bonnie Cranachan.  I brought a few recipes of my own to share.  I had oatcakes on hand for snacking, and we used my recipes for neeps (turnip puree) and tatties (mashed potatoes).  We discovered that my never fail shortbread only lives up to its name when you keep an eye on the oven, and confess that we burnt the first batch. Did I mention I won a bottle of special edition Glenfiddich Cast of Dreams?  Read more about the night on the Reader’s Digest Open Kitchen Blog. 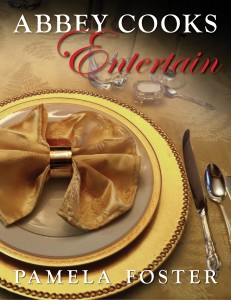 I think you will find something to tempt you amongst the 220 recipes I have included in this book. If nothing else you will want to get the book for recipes for the famous Downton dishes from Season 1-3:

You can only get a signed copy HERE on my site. If you don’ have an eReader I would suggest the PDF version which can be printed if you like.

To take one’s mind off of last week’s Downton episode, here is a cake challenge to make and a lovely dish to serve.  Battenburg cake is an eye-catching addition to any tea tray.  It essentially is a genoise cake wrapped in almond paste.

The popular version of its history is that it was created for Queen Victoria’s granddaughter Victoria wedding to  Prince Louis of Battenburg in 1884.  The four squares allegedly were to represent the four Battenburg princes.  At least one clever culinary historian (Ivan Day) did the math, locating the earliest record of the cake was 14 years after that wedding. Frederick Vine, a prominent British food writer of the time, made the cake with nine panels, not four.  Ivan was able to discover a Battenburg cake recipe which is actually a fruitcake which would have explained why it would have been prepared for a wedding feast.   I  tend to agree with Ivan that the 4-panel story was invented by the commercial bakers who had to justify reducing the panels from 9 to 4 which would be easier to produce.

Regardless, it is still a lovely treat, so what we present today is a light version (no butter) of this cake. The yellow section is lemon flavoured, the pink section a delicate hint of rose.  If you have your own favorite sponge or yellow cake recipe, feel free to use it, and follow the same procedure. 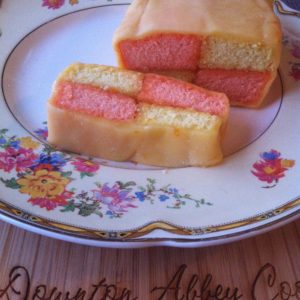 About Marzipan and Almond Paste:  In the UK, marzipan and almond paste are much the same, but in the US almond paste has equal parts of almonds and sugar while marzipan has a higher ratio of sugar (up to 75% sugar) which makes it easier to roll, so if you are concerned about the sugar you may wish to seek out the almond paste in the store or make your own.
Tried this recipe?Let us know how it was!

If you are looking for an economical, yet hearty dish to serve your family, try Pasta e Fagioli, or Italian bean soup with pasta. It has a long history dating back to the Roman Empire, treasured for its comforting qualities as the season turns to cooler https://downtonabbeycooks.com/comforting-pasta-e-fagioli-italian-bean-soup/

#JulianFellowes gets go ahead for a sequel of #Belgravia
http://ow.ly/MQsp50KXATW