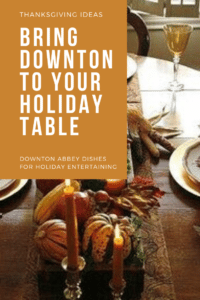 Across America, many seasoned cooks have already finalized their Thanksgiving dinner menus and double-checked their order for a fresh turkey.  Less experienced cooks are summoning up the courage to take on their first big meal, excited about starting new family traditions of their own, but nervous about how it will all come together. The rest are finalizing their travel plans or are plotting to find a spot at their hosts.

Thanksgiving is a North American holiday so the Dowager may well ask “What is Thanksgiving Dinner?” The British don’t celebrate Thanksgiving in the same way. Instead, harvest festivals are held across the UK during the month of October, and there is traditionally no big holiday meal.  In Canada, the Thanksgiving holiday is held the second Monday in October, presumably since our growing season is shorter.  It has nothing on American Thanksgiving as I learned from living in the US.  As an outsider, it occurred to me that this holiday has greater significance as a time to gather family and friends than Christmas. For that, America, you really do need to give thanks to those who are able to gather on the holiday weekend.

The Pressure of Deadlines

Deadlines have a wonderful way of either snapping you out of procrastination or pulling you deeper into denial.  First-time hosts may find themselves in a bind when they discover that all the free-range fresh turkeys were all ordered weeks ago, that they have no idea how to cook a turkey and that they really want to spend their time on is scouting out the deals for Black Friday.  If this is you, you might consider making baked ham. You essentially just put it in the oven on low heat for hours on end.

November does mean that Christmas decorations are displayed in stores counting down to Christmas.  Mrs. Patmore would already have been fussing about getting fruitcakes made and, on Stir Up Sunday (the last Sunday before Advent), preparing the Christmas Pudding and Mincemeat made.

Adding a Touch of Downton to Your Holiday Table

Downton Abbey fans looking to add a little bit of Downton to their holiday meal might wish to browse these suggestions to change things a bit, include new traditions, and make your holiday a little more healthy.

I have a number of “traditional” Thanksgiving” recipes which you can quickly find here in one click, but there are other dishes that will suit your holiday entertaining. Some dishes have the distinction of being served on the ill-fated Titanic, which can make it quite the conversation starter (or move the topic away from politics and religion).

Here are some options for family members who have specific dietary needs.