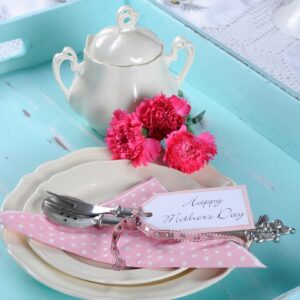 “Since the day I was born I have loved you so much…” were the opening words I penned on a handmade Mother’s Day card back in the 3rd grade.  Those were the only words I remember as our teacher was a merciless editor and I think those were the only original words I was allowed to keep in the final version that was sent home to my Mother.

I am sure Mom still has the card tucked away somewhere, along with the gold painted broach made from an eye glass lens which accompanied the card.  Memories of Mother’s Day stay with us, as children and then as we grow up to become mothers of our own.

The celebration of motherhood can be traced back to the Egyptians, but we will fast forward to more current history.  There is an excellent website on the history of Mother’s Day for the Jeopardy fans in the crowd. Plus you can shop for a bit of land in Scotland at the same time!

In North America Mother’s Day is celebrated on the second Sunday in May. Currently there are close to 70 countries who officially celebrate Mother’s Day, but at different times of the year and in different ways.

Some countries, like France in 1918 with influence from American troops, simply imported the US secular traditions. Others, including countries whose tradition stems from the English Mothering Day, maintain traditions quite different from those of the United States. Still others have ignored or abandoned the more religious and commercial notions of Mother’s Day, choosing instead to focus on women’s issues and women’s rights by celebrating International Women’s Day.

For some countries there is religious significance to the day.

The Mother of Mother’s Day in North America

Mother’s Day is a tribute to commercialism which its founder fought bitterly against.  Anna M. Jarvis successfully campaigned to have the first official Mother’s Day celebration held, a tribute to her mother Julia Ward Howe who conceived the Mother’s Day Proclamation back in 1870.

There’s a reason ‘mother’ is singular:  Jarvis was very intentional about the name of her holiday. It’s Mother’s Day — as in one mom. The way Jarvis put it, Mother’s Day is a day to honor “the best mother who ever lived, yours.”

When the Americans get a good idea in their heads they run with it, and while Anna dedicated her life to making Mother’s Day an official holiday (Woodrow Wilson declared it in 1914), she spent as much effort to stop the exploitation of the Mother’s Day, particularly by the flower industry who continue to profit.  The end of Anna’s story is that she died in 1948, blind, poor and childless.  Ironically, The Florist’s Exchange anonymously paid for her final care.

Instead of taking mom to a packed Mother’s Day brunch, why not host Afternoon Tea for her at home. From cream tea to a full afternoon tea menu, I share plenty of ideas.

I have also listed a number of “Mother’s Day” dishes at www.downtonabbeycooks.com, to thrill mom.

Downton Books for Mom: The World of Downton Abbey

Now that you have an interesting Edwardian period story to share with your mom as you present flowers to her this weekend, you might also consider a present.  I have suggested hosting tea for mum, and you might also want to buy her a book.

If your mother is a fan of Downton Abbey, and she already has seen all the episodes multiple times over the long winter months, I think the best gift you could offer is TheWorld of Downton Abbeywritten by Jessica Fellowes, the niece of Julian Fellowes.  I believe the best way to describe it is that this book is as beautiful to look at as it is to read.  It is more than a coffee table book with lovely pictures, and much more than a fan tribute with behind the scenes photos of filming at Downton Abbey.  While there are some comments from the actors to add some spice,  Jessica takes the same care and attention as her uncle to use the Crawley story line to pay tribute to the grand country houses like Highclere Castle where Downton is filmed.  She teaches us about Edwardian life and the back story of the characters that we have come to know and love; while it was a different time, some things never change, like devotion to family.  It is very much like taking a history class on the Edwardian era, using Downton Abbey as the teaching tool.  I would not be surprised if American universities will be launching courses using Downton as a backdrop.

Julian Fellowes writes the Foreword as homage to these great houses which were mostly abandoned after the collapse of the agricultural economy.  Some were rescued and reinvented as new families used the grand space in different ways. Sadly the vast kitchen and ante rooms behind the green baise door had to go.  An interesting tidbit was his reference to his great-aunt Isie who was the model for the Violet Grantham character.

There are many books written about this era and various connections to Downton Abbey, but this is a great one to start with which your mom will adore.  As a foodie there was enough written about the food, the kitchen,  as well as Daisy and Mrs. Patmore to keep me entertained. Jessica’s reading list is quite extensive. But for most moms who are always quite busy, I am sure they will be happy just to be able to flip through the gorgeous photographs.